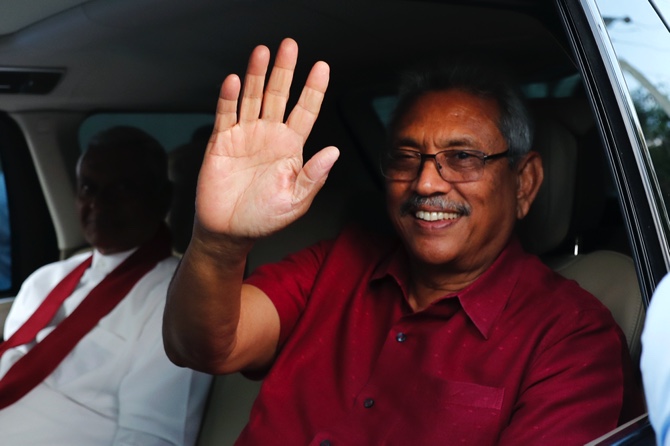 A family of strongmen who tilted Sri Lanka toward a deep reliance on China clinched victory in a tightly-fought presidential election, as voting showed the country remains divided down ethnic lines.

Gotabhaya Rajapaksa won 52.3% of the votes, while ruling alliance candidate Sajith Premadasa had 42% at the final count, according to the Election Commission of Sri Lanka. There were a record 35 candidates in the election.

Rajapaksa, 70, secured his win by capturing votes in Sinhala-Buddhist southern provinces, while Premadasa had large majorities in the Tamil-dominated north.

“The early results looks like it’s going to leave Sri Lanka very polarized, especially on the north-south divide,” said Akhil Bery, South Asia analyst at risk consultancy Eurasia Group. “It’s incumbent on Gotabhaya to prove that he can bridge the gap, but past indicators make it unlikely.”

In a speech after he was declared winner, Rajapaksa said he intends to be a leader for all Sri Lankans.

“I am fully cognizant that I have to serve all Sri Lankans, irrespective of race and religion, for those who voted for me and those who did not,” Gotabhaya said.

Minority Tamil and Muslim groups together form about 25% of the country’s population, and had been crucial for Premadasa, 52.

“There is a genuine sense of fear about what a Gotabhaya presidency means for minorities, and it will be up to him to show that he is indeed looking to the future and healing the wounds of the past,” Bery said.

Rajapaksa, a former defense secretary, made national security his key campaign platform. He rode the tide of growing disillusionment that grew after deadly Easter attacks killed more than 250 people in April and highlighted the security failures of the present government.

His brother Mahinda Rajapaksa’s tenure in office — between 2005 and 2015 — saw a marked deterioration in democracy, in particular press freedom, said Katharine Adeney, director of the University of Nottingham Asia Research Institute, and who specializes in South Asia politics and ethnic conflict.

“It’s likely that Gotabaya will have learnt the lessons of the 2015 defeat — that he needs to be careful not to alienate the majority Sinhalese by undermining the democratic process too much — but there are real concerns about the fate of minorities, both Muslims and Tamils, under his leadership,” Adeney said in an email.

Rajapaksa inherits a country with an economy where growth has slowed to a more than five-year low of 1.6% in the quarter ended June, and which has a debt level hovering at 83% of GDP.

Premadasa was part of the ruling alliance that took power four years ago vowing to push for greater democracy, more transparent finances and an independent foreign policy with improved ties with the U.S. and India.

“I look forward to working closely with you for deepening close and fraternal ties between our two countries and citizens and for peace, prosperity as well as security in our region,” Modi said.

While Premadasa had promised reconciliation measures to help the country heal from the wounds of the civil war, his party faced a credibility crisis after the security lapses that led to the Easter attacks on churches and hotels.

“We have just witnessed the most peaceful presidential election in the history of our independent republic,” Premadasa said in his concession statement. “This was a result of the democratic gains and institutional reforms that have taken place over the last five years, that empowered an independent elections commission and restored the rule of law.”

He appealed to Rajapaksa to “strengthen and protect the democratic institutions and values that enabled” his victory. Premadasa also said he was stepping down as deputy leader of the United National Party, led by Prime Minister Ranil Wickremesinghe.

Investors had taken a wait and see approach ahead of the elections, said Adrian Perera, chief operating officer, Equicapital Investments in Colombo. The benchmark stock index has risen 16% in the past six months, making it one of the world’s 10 best-performing equity markets. Anusha Ondaatjie, Bloomberg