Analysis | Policy Address: After health crisis victory, some question if HIS has will to save economy 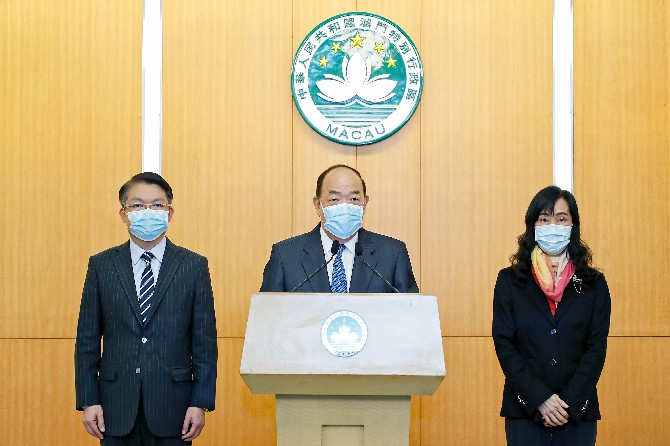 Chief Executive Ho Iat Seng (HIS) has satisfied the public with his handling of the novel coronavirus outbreak, riding on a wave of popularity in his first four months leading the city. However, some political commentators have argued that despite his success tackling the Covid-19 health crisis, the government has failed to show the political will to adequately address social problems caused by the pandemic.
This afternoon, Ho is set to deliver his first Policy Address to review what has already been achieved with regards to alleviating the economic impact of the Covid-19 pandemic outbreak. Usually presented every November, the Chief Executive is set to detail the government’s future recovery plans.
Aside from the usual announcements on housing, the economy, and further integration of the Macau SAR in the Greater Bay Area (GBA), some observers are holding out for the government to establish policies in other, sometimes overlooked areas of society.
According to some political commentators, the public is hoping for fresh ideas and perspectives on the city’s future development in a bid to increase confidence in the current administration.

HIGH PERFORMANCE, HIGH EXPECTATIONS
A study conducted in early February by the Macao Polling Research Association showed that nine out of 10 members of the public are satisfied with the local government’s measures to prevent a further outbreak of the novel coronavirus. Just four months into the job, Ho Iat Seng is thought to be riding on a wave of popular support.
Having pleased the Macau public with his work to combat Covid-19 so far, Ho has set high standards for the upcoming address.
Lawyer Sérgio de Almeida Correia expressed his belief that Ho has been generally good at protecting the Macau SAR and its residents during the Covid-19 outbreak, noting, “it is natural that expectations are high at this point.”
This same sentiment was echoed by political commentator and legal expert António Katchi, who dubbed the current administration’s move as “largely correct and undoubtedly effective.”
But early success in the health campaign have led to high expectations in many quarters of the city regarding the post-Covid-19 economic recovery plan.
Of particular note are the social and economic problems caused by the Covid-19 outbreak.
For Katchi, the government’s address of the public health crisis has not shown any political will to tackle social problems caused by the Covid-19 outbreak.
Katchi referred to the failure of the government to protect employees from employers and tenants from landlords, adding that the government has showed contempt for non-resident workers, treating them as a “discardable labor force.”
Residents who are self-employed professionals, small businessmen, and perhaps some medium-sized enterprises may also bear the economic consequences of the pandemic, however he noted that large company shareholders and real estate speculators will be spared.
“Right at the beginning of the outbreak, the government should have submitted to the Legislative Assembly a temporary emergency bill banning layoffs, furloughs, unpaid leaves, and salary reductions on any ground, forbidding employers from forcing employees to take paid annual leave,” Katchi told the Times.
But he said he does not expect such measures to be undertaken by the government.
“It would run counter to its very nature of a bourgeois, pro-oligarchy government. It has already made its choice about who will bear the consequences of this crisis: first and foremost, non-resident workers; then, to a lesser degree, resident workers – for the time being, only in the private sector,” he said.
Many non-resident workers have already lost their jobs because of the pandemic, while redundancies have also been noted among the resident workforce.
For today’s Policy Address, Paul Pun, secretary general of Caritas Macau, is hoping for the concerns of the Macau’s most vulnerable to be included in Ho’s plans for this year.
According to Pun, the new government should address areas which the previous government never tackled through the annual address, particularly those concerning the protection of non-resident workers.
“Today we should have something to accommodate the migrants that also contribute to the safety of the society. They have a role to play. Local citizens and non-resident workers are partners in some way. We still need to think of something to serve those people,” said Pun.
Lawyer Correia also agreed that measures to encourage the economy and support better integration of non-resident workers from abroad are needed.

SERIOUS SCRUBBING
Aside from this matter, there was also a call for further transparency and clarity in the city’s public administration.
Correia stressed that, due to the low taxation in the SAR, there is no reason to allow companies or shareholders with addresses in the British Virgin Islands or Cayman Islands to operate in the city unless there is “something to be kept secret.”
The lawyer is looking for an approval of a set of measures to effectively combat corruption, namely through a substantial increase in the taxation of offshore companies that still operate in Macau and are holding real estate assets.
Correia noted that a clear and coherent program for reforming the Public Administration, the justice system including courts, conservatories, notaries, and bilingualism is needed. He also called for a mechanism to hold political office holders accountable and for a serious anti-corruption drive greater than that seen in the mainland.
“After 20 years of integration, Macau needs a greater cleansing than that carried out by President Xi Jinping in Beijing and in the interior of China,” said the lawyer. “If that cleansing had been carried out soon after 1999, or at the end of the first Chief Executive’s decade, Macau would be much better today. There’s no place for corrupt people to continue doing business in Macau and exploiting its people under the cover of patriotism,” he added.

ACROSS THE BORDER
The Chief Executive has also said that he seeks to actively encourage young people to participate in the development of the GBA.
Ho’s electoral campaign had included a goal to improve the comprehensive quality and competitiveness of young people as well as to implement active policies on youth employment and entrepreneurship.
However, given the Covid-19 pandemic and the stricter border restrictions put in place, one political commentator believes that border controls recently imposed in the GBA have put the relocation plans of Macau residents on hold. For Larry So, the lockdown discourages young entrepreneurs that are keen to transfer to the GBA, because there are no assurances they will be allowed to return to Macau at their leisure.
“There is nothing wrong with the lockdown. But if we are talking about encouraging people to move to the GBA, do we mean that if anything like this pandemic happens, our young people who are staying in one of the GBA cities cannot come back to their homes? This is a dilemma,” said So.
The commentator called for this matter to be discussed during the Policy Address, noting that Ho’s campaign platform had made GBA integration a major policy objective.
Correia also agreed that in spite of Macau’s integration into the GBA and the accompanying policies of the central government, Macau must have its own technological, cultural and scientific development program to justify its political and administrative autonomy.
CAUTION: INFLATION AHEAD
Another major issue that some would like to see addressed this afternoon is the mid-term prognosis on the economy and whether the various cash handouts and subsidies will create inflationary pressures.
The government has aimed to boost the business activity of local small and medium enterprises (SMEs) through the issuance of two rounds of e-vouchers totaling 8,000 patacas for every resident. The credit, which comes amid a raft of new measures, can be used for consumption purposes across the city, but some entities, such as casino operators, are excluded.
For Katchi, this type of financial assistance should not have been the government’s first method of alleviating the economic pressure on small businesses.
The suspension of rental obligations and bank loan repayments would have been a much better approach to help small businesses survive and help their employees to retain employment. “Only if that were not enough should government [direct] financial aid to SME’s be considered – the latter should never be the first option,” he said.
Other commentators are worried that the e-vouchers may prove ineffective at stimulating the economy and putting cash back into the pockets of the people if consumer prices grow at a faster pace than the moderate rise of recent years.
“The government is giving out a lot of money to encourage people to kind of stimulate the local market but at the same time, once when we have this kind of ‘free money’ going around, our inflation will also freely go up,” said So.
Democrat lawmaker Au Kam San said that the current cash handout is just a short-term measure and he is concerned about the need to develop a more permanent support structure.
“In the next half year or so, I think the government should do more because the effective period of this [measure] is merely six months,” said Au.
The lawmaker wants Macau to be better prepared when the SAR is again faced with another economic restructuring, whether it be willingly undertaken through diversification efforts or due to a global catastrophe like Covid-19. “We can’t hope for ambitious plans, but I still hope the government can refine existing policies,” said Au.
The Policy Address will be held at 3 p.m. today at the Legislative Assembly, followed by a press conference at the Government Headquarters at 5 p.m., where the Chief Executive will answer questions from the media.