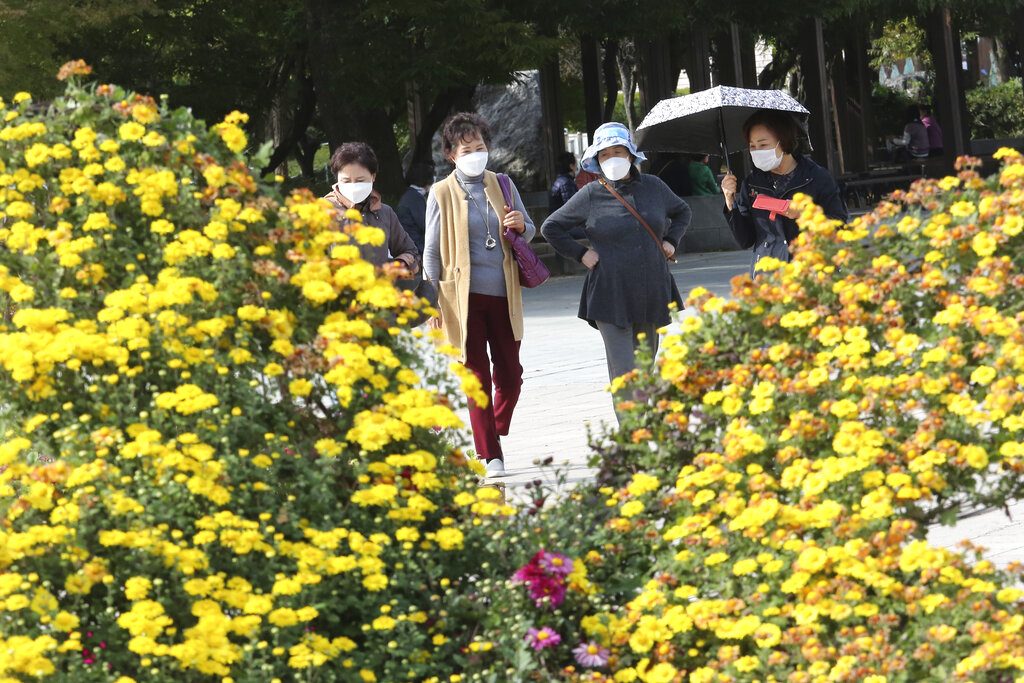 Women wearing face mask to help protect against the spread of the coronavirus pass by flowers at a park in Goyang, South Korea, Thursday (AP Photo/Ahn Young-joon)

South Korea has reported 110 new cases of the coronavirus, half of them linked to a hospital in Busan.
The numbers released by the Korea Disease Control and Prevention Agency on Thursday brought the national caseload to 24,988, including 439 deaths.
At least 54 infections were reported in a hospital for the elderly in the southern port city of Busan.
More than 40 others came from the densely populated Seoul metropolitan area, tied to places including hospitals, churches, schools and offices.
The steady rise in infections is a cause of concern in a country that has just lowered its social distancing measures, allowing high-risk venues like nightclubs and karaoke bars to reopen and spectators to return to professional sports.
Health officials are planning to test 160,000 employees at hospitals, nursing homes and welfare centers for senior citizens in Seoul and nearby areas as part of efforts to prevent outbreaks.
In other developments in the Asia-Pacific region:
— Seven months after screens went dark, cinemas reopened Thursday in much of India with mostly old titles on the marquee — a sign of the country’s efforts to return to normal as the pace of infections slows but also of the roadblocks that remain. The return to movie theaters comes as India is registering the highest number of daily cases globally and is expected to soon top the list worldwide in terms of total number of infections, passing the United States. But trends also suggest the spread is beginning to slow. Nearly 10,000 theaters closed in mid-March when the government imposed restrictions to fight the virus. They are among the last public places to reopen — a hugely symbolic move in a country known the world over for the lavish productions pumped out by its Bollywood film industry. Movie theaters pose some of the biggest infection risks since they put people in a closed space, where the virus can spread easily, for an extended period of time. To minimize the danger, Indian cinemas have separated seats, staggered show times and are encouraging digital payments. Masks and temperature checks are mandatory.
— Australia’s prime minister says his government is giving priority to reopening air services to Japan, Singapore and South Korea. Prime Minister Scott Morrison said Thursday he had discussed reopening air routes with the leaders of all three countries. He described Japan and South Korea as “two countries that have done particularly well” in dealing with the pandemic. “There are a number of countries we’re looking at to see what we can do probably next year. We’re not going to rush into this,” Morrison said. Australia will allow travelers from neighboring New Zealand to arrive without hotel quarantine from Friday. New Zealand has eradicated community transmission of COVID-19, but it will continue to insist travelers from Australia quarantine for two weeks on arrival. Australia reported only 12 new cases of community transmission on Thursday. The most populous states of New South Wales and Victoria reported six each. Morrison said Australia had one of the best health and economic responses to the pandemic of any country in the world.
— Hong Kong and Singapore say they have agreed to a bilateral air travel bubble, re-establishing travel links as coronavirus infections in both cities decline. Under the agreement, travelers from Hong Kong and Singapore will not be restricted on their travel purposes, Hong Kong commerce minister Edward Yau said Thursday. This means that tourists from each city will be able to visit the other. Both Hong Kong and Singapore closed their borders earlier this year, banning short-term visitors from entering as they fought to reduce coronavirus infections. Under the air travel bubble, travelers will also not be subject to compulsory quarantine, provided they have taken coronavirus tests mutually recognized by both cities, with a negative test result. Additionally, travelers are required to fly on dedicated flights which will only serve air travel bubble travelers between Hong Kong and Singapore.
— Indonesia on Thursday recorded another jump in coronavirus cases to overtake neighboring Philippines as the country with the highest number of confirmed infections in Southeast Asia. The government’s COVID-19 task force announced that Indonesia recorded 4,411 new infections, taking its total to 349,160. That is higher than the Philippines’ 348,698 cases. Indonesia has reported 12,268 deaths, also the highest in Southeast Asia. Despite a surge in cases nationwide, President Joko Widodo has urged local administrations to refrain from imposing lockdown measures that could cripple the region’s largest economy. Seven months into the pandemic, the government has been lambasted by experts for prioritizing economic recovery over public health, which has resulted in the outbreak showing no sign of abating and has strained healthcare systems. The National Commission on Human Rights on Thursday urged the government to evaluate its COVID-19 response by prioritizing basic rights.
— India has reported its lowest daily increase in coronavirus deaths in nearly three months. The Health Ministry on Thursday reported 680 fatalities in the past 24 hours, the lowest in 11 weeks, raising the country’s death toll since the pandemic began to 111,266. The country was seeing more than 1,000 virus deaths per day last month. The ministry also reported 67,708 new infections, raising India’s total to more than 7.3 million. According to the ministry, India’s average number of daily cases dropped to 72,576 last week from 92,830 during the week of Sept. 9-15, when the virus peaked. Over the last month, the country has been seeing a trend of declining cases on a week-to-week basis. Health experts have warned about the potential for the virus to spread during the religious festival season beginning later this month, which is marked by huge gatherings of people in temples and shopping districts.
MDT/AP