A decade of gambling expansion ends 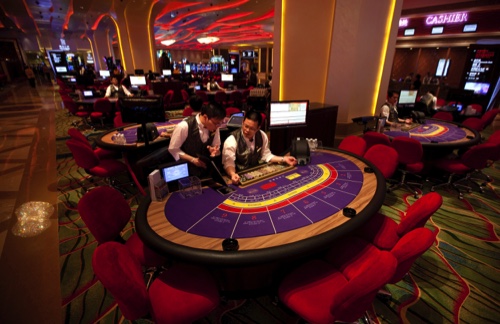 Macau’s casinos recorded their worst year, ending a decade of expansion that turned the former Portuguese enclave into the world’s biggest gambling hub. More tough times are ahead.
Casino revenue in the city fell 2.6 percent to 351.5 billion patacas (USD44 billion) in 2014, after a record 30.4 percent monthly drop in December, according to figures from Macau’s Gaming Inspection and Coordination Bureau.
Chinese President Xi Jinping’s bid to catch “tigers and flies” in an anti-corruption drive and weaker economic growth means Macau may face shrinking revenue until at least mid-2015, when new resorts open. The crackdown has deterred high rollers who account for two-thirds of Macau’s casino receipts, and wiped out about $73 billion in market value of companies including Wynn Macau Ltd. and SJM Holdings Ltd. last year.
“The VIP heyday is over,” said Philip Tulk, an analyst at Standard Chartered Plc in Hong Kong. “The anti-corruption crackdown doesn’t look to be a short-term phenomenon,” with funds flows between the mainland and Macau being much more closely scrutinized, he said.
Xi has urged the city to diversify its economy and transform into a global tourism and leisure center. Macau’s casino takings are seven times that of the Las Vegas Strip and contributed more than 80 percent of the government’s annual revenue last year.
Casino revenue fell to 23.3 billion patacas in December for a seventh straight month of decline and the biggest drop since Macau began recording monthly figures in 2005. Macau had posted its smallest annual casino revenue gain of 9.7 percent in 2009, after it began yearly records in 2002.
As the only Chinese city where casino gambling is legal, Macau has seen the industry’s revenue expand 8.5 times since the 2004 opening of its first foreign casino owned by billionaire Sheldon Adelson, after the government ended local gambling mogul Stanley Ho’s 40-year monopoly.
It will be difficult for the local casinos to see a “breakthrough improvement” in 2015 revenue as the industry experiences continued adjustments, according to a Dec. 31 memo from Ho’s SJM Holdings Ltd. obtained by Bloomberg News. SJM would raise salaries by 5 percent, amid increasing protests by casino workers for better pay, according to the memo.
Slower and steadier growth should be expected as the market matures, Leong Man Ion, deputy director of Macau’s gaming regulator, told China’s state-run Xinhua News Agency last month. He predicted the revenue slump will continue until the middle of 2015.
“2010 and 2011 had exceptionally high growth rates; Macau will never see those growth rates again,” said Aaron Fischer, a Hong Kong-based analyst at CLSA Ltd., via telephone. The city’s gaming revenue jumped 58 percent and 42 percent respectively those two years, Macau government data shows.
Headwinds will persist into the third quarter of this year at least, Wells Fargo & Co. analysts led by Cameron McKnight wrote in a note last month. “With revenue trends still decelerating sequentially, it is now unlikely that the overall Macau market will grow in 2015,” McKnight wrote.
Wells Fargo and Union Gaming Group both estimate a 20 percent year-on-year decline in the first quarter, while CLSA forecast a 29 percent drop.
At the inauguration of Macau’s newly re-elected Chief Executive Chui Sai On in December, Chinese President Xi called for the city’s leader to step up regulation and supervision of gambling. Chui said his administration will conduct a review in spring this year and encourage more non-gambling elements to balance the industry.
Macau’s government has been curbing money flows to the territory over concern that illegal funds are being taken out of the mainland. It is restricting the use of China UnionPay Co.’s debit cards and its hand-held card swipers at casinos. Further clampdowns are expected with the help of banks.
The gambling regulator is also tightening scrutiny of agents used by junket operators, which arrange trips and provide credit for high-stakes gamblers known as VIPs.
Casino companies including Sands China and Galaxy are shifting resources from high rollers to lure more vacationing Chinese and other mass-market gamblers by building malls, theaters, restaurants and hotels.
New project openings starting in mid-2015 with Galaxy’s second-phase expansion of its resort on the Cotai Strip may help underscore a market revival, by targeting tourists who’re seeking a broader holiday experience in addition to gambling, according to CLSA’s Fischer.
“We will see stabilization in revenue in the second half of year, because the base becomes easier and also you’ve got new projects that will drive volume growth,” he said.
Tulk from Standard Chartered is less optimistic. What led to Macau’s slowing revenue growth last year wasn’t casino supply and demand, but declining bets by high rollers, Tulk said. “Unless the top end recovers, the new capacity isn’t going to drive gross gaming revenue significantly positively.” MDT/Bloomberg