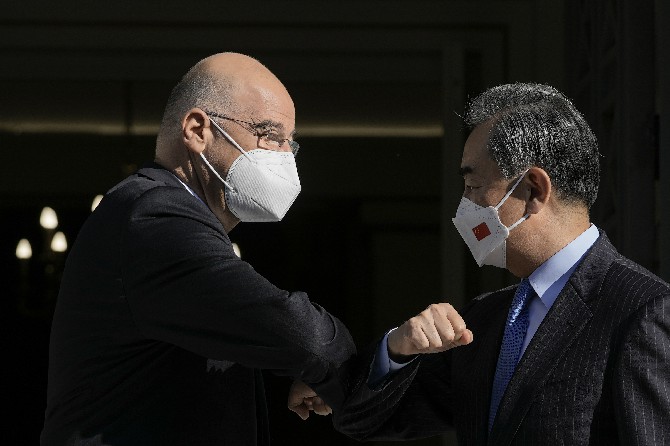 Chinese Foreign Minister Wang Yi met with Greek officials yesterday during a visit to Athens expected to focus on furthering Chinese investments in Greece.
Greece recently emerged from a brutal decade-long financial crisis that wiped out a quarter of its economy and has been eager to attract international investments.
China, which is constructing ports, railways and other infrastructure in dozens of countries around the world under its Belt and Road Initiative, is already heavily involved in Greece. The Chinese company Cosco Shipping now owns 67% of Greece’s Piraeus Port Authority, one of the largest ports in Europe, after Greek lawmakers ratified the sale of a 16% stake in the company on top of the 51% Cosco already held.
Wang met Wednesday with Greek Prime Minister Kyriakos Mitsotakis and then with Foreign Minister Nikos Dendias. Mitsotakis’ office said the meeting examined “the prospects of further developing the Greek-Chinese economic and investment plans” following the ratification of the Piraeus stake sale.
As part of the sale, Greece granted a five-year extension to the investments Cosco had undertaken as part of its original purchase of a majority stake in Piraeus.
“We look forward to new investment projects in the largest port of the Mediterranean, one of the largest in the world,” Dendias said after his meeting with Wang.
“We have repeatedly said Greece can be a gateway from Asia into Europe, an energy hub,” Dendias said.
Wang described China’s involvement in Piraeus as an “emblematic” project as part of the Belt and Road Initiative and a model for mutually beneficial cooperation.
Labor unions, however, have criticized the working conditions at the shipping terminal, saying profits are put above safety, jeopardizing employees’ welfare. A worker died this week in an accident at the Cosco-run container terminal in Piraeus. MDT/AP