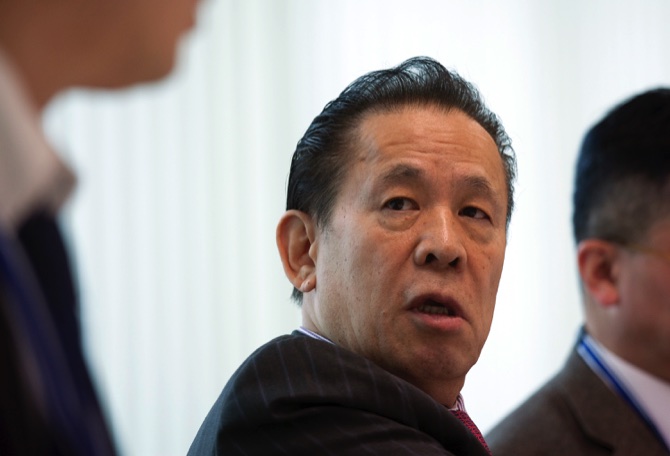 Kazuo Okada, Universal Entertainment Corp. chairman and former Steve Wynn partner, plans to challenge Macau in wooing Chinese gamblers to his Manila casino resort that could cost USD4 billion and is scheduled to open in November.
Okada, 73, wants his casino featuring a 100 meter (328 feet) dancing water fountain and indoor beach “to compete with what is in Macau” and other parts of Asia, said Takahiro Usui, chief operating officer at Universal Entertainment’s Tiger Resort Leisure and Entertainment Inc. “This project will promote Manila as a destination in the region and the world.”
Universal Entertainment rose 9.6 percent to 2,597 yen in Tokyo trading yesterday, the biggest gain since June 2013. The benchmark Topix was little changed.
The Manila resort could cost $3 billion in its first phase and reach $4 billion when three more phases are built, making it the tycoon’s “biggest investment,” Usui said in an interview Tuesday in Manila. That would be about twice the 208.3 billion yen ($1.96 billion) market capitalization of Universal Entertainment, the Tokyo-based maker of gambling machines in which Okada Holdings controls a 68 percent stake.
Manila is aspiring to become the next Asian gambling hub as high-stakes Chinese gamblers increasingly abandon Macau amid the Chinese government’s crackdown on corruption. Okada’s project is one of four casino resorts the Philippines wants built on a 120-hectare property along Manila Bay, dubbed Entertainment City, as the nation seeks a larger share of Asia’s gaming and tourist revenue.
“The gaming industry in [the] Philippines should have the best performance ever in the second quarter ended in June as more gamblers are leaving Macau amid its stricter gaming regulation,” said CLSA Ltd. analyst Marcus Liu Tuesday. The large investment “underscores Okada’s commitment and confidence in the Philippines’ gaming market,” he said.
Okada is embroiled in a high-­profile lawsuit against Wynn Resorts Ltd. after the company accused the Japanese tycoon of making improper payments to Philippine gambling regulators and forcibly redeemed his 20 percent stake in the casino operator in 2012. Okada has denied the allegations, and the suit is on-going.
Okada Manila will be the third casino resort to open in Entertainment City and the largest with over 26,000 square meters of gaming space. It will compete with a project by Philippine billionaire Enrique Razon’s Solaire, and City of Dreams Manila, a venture between Melco Crown Entertainment Ltd. and the Philippines’ richest man, Henry Sy. The fourth property, a project by Philippine billionaire Andrew Tan and Malaysian tycoon Lim Kok Thay, is expected to open in the fourth quarter of 2020.
Traffic at Okada Manila, which is built on 44 hectares facing Manila Bay’s sunset, will initially be a mix of 30 percent foreigners and 70 percent locals. The casino wants half of its clientele to be overseas visitors including Chinese, Japanese and Koreans after a year as the resort conducts marketing among travel agents and gambling promoters, Usui said.
Shares of Bloomberry Resorts Corp., owner of Solaire, sank 4.5 percent in Manila, heading for the biggest loss in three weeks. Travellers International Hotel Group Inc., operator of Resorts World Manila, slid 0.8 percent, halting a five-day gain, while Melco Crown Philippines Resorts Corp. slumped 5 percent to a three-week low.
“Okada is coming to town, a grim reminder to investors of the oversupply facing an industry that is already competitive,” said Jonathan Ravelas, chief market strategist at BDO Unibank Inc. “This is a serious property and the question is who among the existing players will get hit the most. This is the time to capitalize on gains.”
The 500-gambling table Okada Manila will be a jump-off point for other resorts the Japanese businessman plans to build in other parts of the country, said Antonio Cojuangco, Okada’s Philippine partner in the Manila project. Sites are being scouted in the provinces of Palawan and Davao, with development likely to start in the next two years, he said.
Okada may recover his investments in as much as two years and could hold a public share sale in the Manila casino venture after 18 months should the expected revenue come in, Cojuangco said. Ian Sayson, Bloomberg