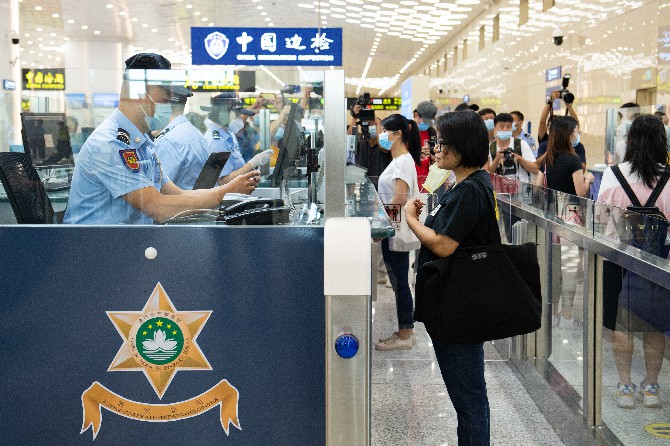 The government has made sweeping changes to cross-border regulations, including a mandate from July 31 requiring flight passengers from all mainland provinces to present proof of a negative test for Covid-19 conducted within 48 hours before boarding.
The stricter regulations come after China registered spikes in locally transmitted cases in several regions including Nanjing and Zhangjiajie.
In addition, the government also extended the scope of medium to high-risk areas from what was previously certain regions in a community to now include entire cities.
Arrivals who have been to Zhangjiajie City, Nanjing City and Changde City from July 17 onwards are now required to undergo 14 days of mandatory quarantine upon arrival.
Meanwhile, arrivals who were in Chengdu, Shenyang or Dalian on or after July 17 will see their health codes changed from green to yellow. Although they do not need to observe medical observation, they must take a Covid-19 test on the first, third and fifth days after entering Macau.
Director of the Health Bureau (SSM) Alvis Lo announced the string of new rules at yesterday’s Covid-19 briefing.
As of yesterday, the government registered upwards of 100 people who had recorded their travel history in Zhangjiajie since July 17 via the city’s health code system. The authorities had contacted relevant individuals via SMS and required them to go to Pac On Terminal to take a C0vid-19 test.
Mainland authorities traced the origin of some recent local cases back to a theatre show named “Charm Xiangxi” on July 22 in Zhangjiajie, with an audience of around 2,000. These cases were found to be linked to the Mainland’s new Covid-19 epicenter, the Nanjing Lukou International Airport.
Leong Iek Hou, coordinator at the Center for Disease Control and Prevention reassured the public that the government has so far received no information that any resident attended the theatre show in Zhangjiajie, nor had contact with any confirmed cases who had been to Zhangjiajie.

Avoid Unnecessary Travel
Lo regarded these measures as “relatively bigger changes” in response to the current pandemic situation in China.
The director urged locals to stay aware of the coronavirus situation across different mainland cities, and to avoid going to high-risk areas. Lo advised against unnecessary travel during the summer holiday.
He also called on locals to make good use of their spare time during the summer holiday to get vaccinated, to protect themselves and the public.
The government also confirmed that the current hotel rooms designated for quarantine purposes are sufficient to accommodate a recent increase in the number of Hong Kong arrivals.
In June, the government received 10 queries about the quarantine measures for Hong Kong arrivals, but the tally in July as of yesterday had increased to 21, according to Lam Tong Hou, the representative of the Macao Government Tourism Office (MGTO).

Teenager’s myocarditis  may be linked to vaccination

A 17-year-old teenager is suspected to be suffering from myocarditis, a condition of inflammation in the heart muscle, after receiving the second shot of the Pfizer-BioNTech mRNA vaccine on July 26.
The case was reported yesterday and classified as a serious adverse event after inoculation.
The patient developed chest tightness on July 27 and sought medical treatment at Centro Hospitalar Conde de São Januário on the next day. The initial electrocardiogram and blood tests showed no abnormalities.
However, the man experienced worsened chest tightness the following afternoon and was diagnosed as having myocarditis in his second blood test.
Tai Wa Hou, coordinator of the Health Bureau’s Covid-19 Vaccination Operation, said yesterday at a media briefing that the situation of the patient is now “stable,” with his chest tightness alleviated.
The special evaluation team will investigate to examine whether there is any association between the vaccination and myocarditis in this case.