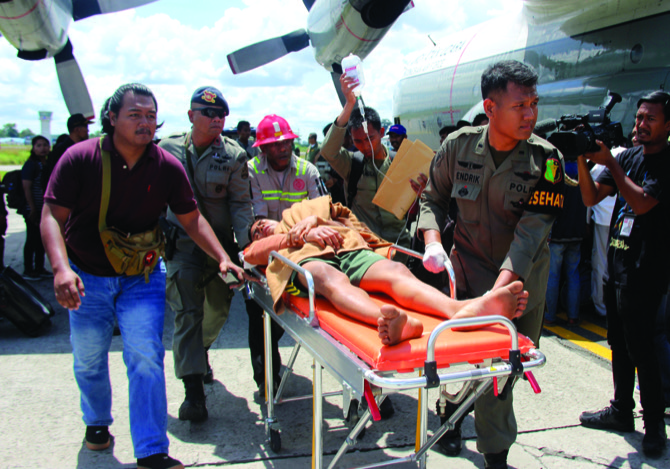 Security forces have located the bodies of 16 people and a soldier who were killed in one of the bloodiest separatist attacks in Indonesia’s restive Papua province, a military official said yesterday.

Army helicopters transported eight bodies and eight survivors, including a 4-year-old boy, from a remote mountainous village in Nduga district, Papua province military spokesman Col. Muhammad Aidi said. Gunfire between security forces and an armed group linked to the Free Papua Movement was hampering efforts to recover the eight other bodies, he said.

The area is a stronghold of separatists who have battled Indonesian rule in the impoverished region for half a century.

Police earlier said 31 workers and a soldier were killed Sunday when gunmen stormed a government construction project in a remote village in Nduga district, citing reports from witnesses.

Authorities on Wednesday revised the figure to 19 civilians, including workers, and a soldier, based on the accounts of survivors.

A forensic team at a hospital in the mountain mining town of Timika was determining whether the eight bodies were those of other construction workers employed by PT Istaka Karya, a state-owned construction company, to build bridges on a section of the trans-Papua road network.

Indonesia’s government, which for decades had a policy of sending Javanese and other Indonesians to settle in Papua, is now trying to spur economic development to dampen the separatist movement.

The workers are considered outsiders by the separatists. AP