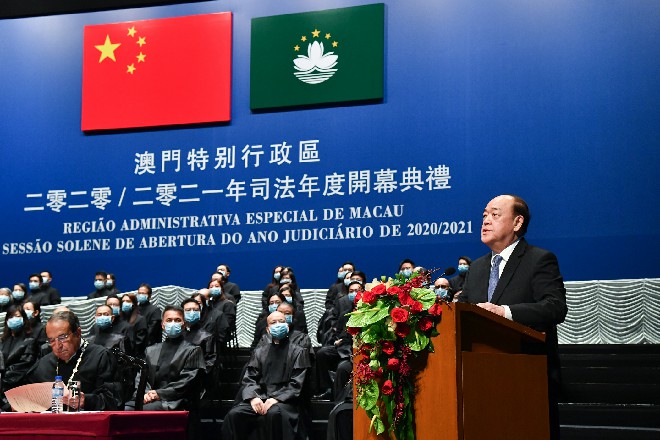 In his speech to mark the opening of this judicial year yesterday, Chief Executive Ho Iat Seng assured the public that the rule of law is a core value in Macau and that the government is committed to providing the city with better rule of law.
Representing the government, he added that the government would, as usual, resolutely maintain judicial independence, firmly defend judicial justice, actively cooperate with judicial organizations earnestly implement judicial organs’ judgments, continue to optimize judicial training mechanisms and continuously improve the development of judicial software and hardware.
At present, the SAR government is planning the construction of offices for the courts and is helping to improve judicial efficiency. The government head also complimented the efforts of all walks of life on the containment of Covid-19 in Macau. He pledged that the government would focus on resuscitating the economy as conditions gradually stabilized.
Meanwhile, Sam Hou Fai, Chief Justice of the Court of Final Appeal, gave a summary of the work of the courts in the past year. He recalled that the courts were affected by Covid-19 as it obstructed stakeholders from entering Macau and attending hearings.
One of the important amendments to the Legal Framework for Judicial Organs is to appropriately expand the jurisdiction of the Court of Final Appeal, so that major cases can be appealed to the Court of Final Appeal. It is a reflection of, and conformation to, the nature and status of the Court of Final Appeal in exercising the power of final adjudication granted to the city under the Basic Law.
In addition, he also pointed out that the SAR has close interpersonal relationships, with various interests strongly intertwined. Therefore, he believes that under the social characteristics and social environment of Macau, to maintain fairness and justice, the law must be enforced more strictly.
On the other hand, Ip Son Sang, Prosecutor-General at the Public Prosecutions Office, disclosed that 18% of cases were recorded at the office. The number of cases fell to 12,109 in the last judicial year, from 14,714 in the year prior to that.
As the office will be relocated to its new building alongside the Liaison Office of the Central Government in Macau in December, Ip hopes that the Public Prosecutions Office will be able to provide even better services to the public.
Also at the opening ceremony, Jorge Neto Valente, President of the Macau Lawyers Association, pointed out that current measures, including the inaugurations of 13 specialized magistrates, were not effective in improving judicial efficiency.
In contrast, he recommended the addition of judicial officials at the Court of Final Appeal. Meanwhile, he said the composition of the committee of judges needs to be changed in order to be able to adapt to the many responsibilities assigned to judges, which means expanding the composition of the committee of judges and reducing its bureaucratic characteristics.

Neto Valente: CPM may have felt pressured to close exhibition

The president of the Macau Lawyers Association, Jorge Neto Valente, believes that there was pressure on Casa de Portugal (CPM) to abruptly close the World Press Photo Exhibition.
Speaking on the sidelines of the judicial year opening yesterday, Valente said, “If the president of CPM [Amélia António] does not want to explain, then there must be some reason that is not good to [be elaborated], right?”
The exhibition has been closed since October 1, just a few days after it was inaugurated at the Casa Garden venue. It was supposed to only end on October 18. CPM said that the exhibition was closed for “management reasons,” but would not elaborate.
Reports speculate that the abrupt closure was due to the photographs of the Hong Kong protests that are part of this year’s exhibition.
“I am against rewriting history.  It [the protest] exists, it is not to hide, it is not to pretend that [it didn’t happen],” he added, as cited in a report by TDM Radio.