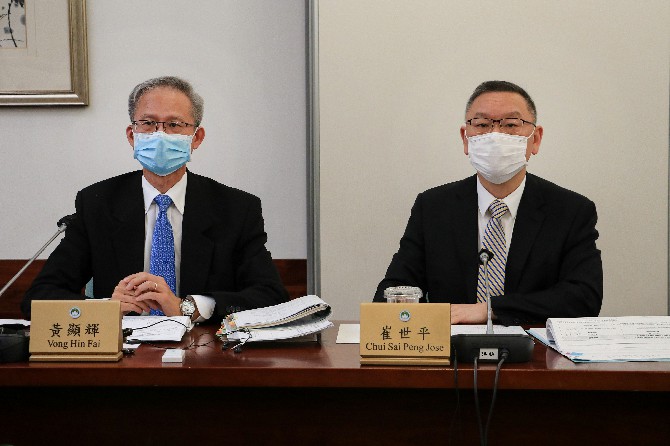 A new bill that aims to amend Decree-Law 67/99/M, which establishes the general rules for teaching staff at the Education and Youth Affairs Bureau (DSEJ), as well as its statutory regulations, aims to increase the work mobility of permanent teachers working in Macau public schools. This constitutes a significant change to the laws and regulations currently in force, which restrict the mobility of teachers on temporary contracts, said the Chairman of the Third Standing Committee of the Legislative Assembly (AL) Vong Hin Fai in a media briefing after a meeting yesterday afternoon.
During the first committee meeting to discuss the details of this new bill, Vong noted that many topics were raised, including increasing the scope for teaching staff mobility and the fact that the new law, contrary to what is currently in force, excludes the teachers’ assistants also working in public schools.
According to the chairman of the committee, the complexity of the law and the need to match it with other regulations in force, such as the General Regulation of the Civil Servants (ETAPM), has led to some concerns from the AL legal advisors.
“The committee members have paid special attention to the object of the bill, which is the statutory rules of the teachers. We heard explanations from the AL legal advisors and we decided to rename the law to start with. Because, according to Article 4, the scope of the law regarding whom it concerns was reduced.”
According to Vong, the new name will be the ‘Statute of the Non-Tertiary Education Teachers of the Macau Official Schools,’ explaining that this happens because the bill applied to teachers only, excluding the administrative and leadership roles, as well as other auxiliary staff from the schools and namely teachers’ assistants.
The exclusion of assistants in the bill was one of the topics that raised concerns, with Vong noting that by the suggestion of many of the lawmakers that made up the committee, they are calling for a clearer explanation from the government.
The issue on the line is whether or not the government wants to enforce a transition rule for such staff, or, following the legislation logic, if the staff excluded by the law immediately and automatically become included in the ETAPM after the approval of this law.
Vong said it was necessary to clarify this with the government, since there are significant differences between the regulation in force and the ETAPM, adding that a transition period and a specific rule for that could help to ensure that these staff members “would not lose any rights previously granted to them.”
Vong also disclosed that on the first day of analysis of the bill, around 32 of its articles were discussed and seven completely new articles were added to the bill in an attempt to clarify it.

Teachers’ mobility and hiring systems require clarification
Related to the new mobility of the teaching staff is also the system that allows hiring temporary teachers “in case of need.”
The lawmakers of the Third Standing Committee believe that the government must present a clearer justification and clarification of the process.
“First, it looks like the new law contradicts the ETAPM by saying that permanent teachers will be included in the mobility process with an aim to make the system more flexible, and the suppression of sudden needs in different schools and even of different school levels,” Vong said.
He added that while it is accepted that this can work as an important tool to allow teachers to be transferred between different levels when needed, it is opposed to the ETAPM rule that says that non-permanent civil servants are included on mobility programs.
“Besides, there is another problem regarding the rule that states that this process can be used in cases of ‘lack of teachers’ and that in ‘special cases’ other teachers can be hired on an individual temporary working contract.”
He explained that this fact causes doubt among committee members who find that ‘according to the needs of the system’ is a very broad concept that can be potentially used to bypass the centralized recruitment systems in force.
“Who will decide this need?” Vong asked, adding, “Is it the Secretary [for Social Affairs and Culture], the director the DSEJ or is it the principal of a school? We will ask the government to clarify this.”

Leaving the Third Standing Committee meeting, the lawmaker José Pereira Coutinho briefly expressed his opinion that the new bill is very complex and anticipated that a long period of discussion would be necessary before it proceeds to the plenary session for the final reading.
“There are many co-related and intertwined articles in this law, and it is written in a quite confusing manner,” Pereira Coutinho told the Times, hinting that there are many aspects of the new bill that need to be clarified and harmonized with other Civil Servants regulations.