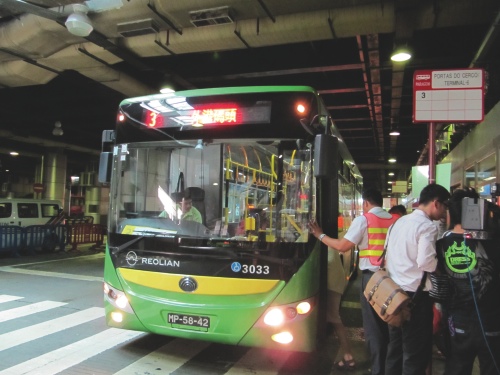 A New Era bus hit a concrete pillar inside the Border Gate underground bus terminal yesterday at around 6 p.m., which resulted in 12 people, including two mainland residents and one Hong Kong resident, being injured and sent to the two local hospitals.
Information suggested that it was the bus driver’s first day on the job. While he was at the wheel of the route 3A bus, which was departing from the terminal, the bus crashed into the pillar.
It is suspected that the driver mistook the throttle for the brake.
The Public Security Police (PSP) said that the 12 people only suffered minor injuries.
It was not the only accident related to the newly-established bus operator yesterday. Two other accidents also took place in Taipa earlier that day.
The first happened at the Esparteiro/ Regency stop. When the route 50 bus was approaching the stop at around 1 p.m., the front left of the vehicle hit the bus shelter.
Its left rear mirror was damaged and the windshield was shattered, injuring the driver. He was sent to hospital.
Another accident took place at the Edificio do Lago terminal, where another route 50 bus was alleged to have hit a pedestrian who was crossing the road. The victim was also taken to hospital. JPL