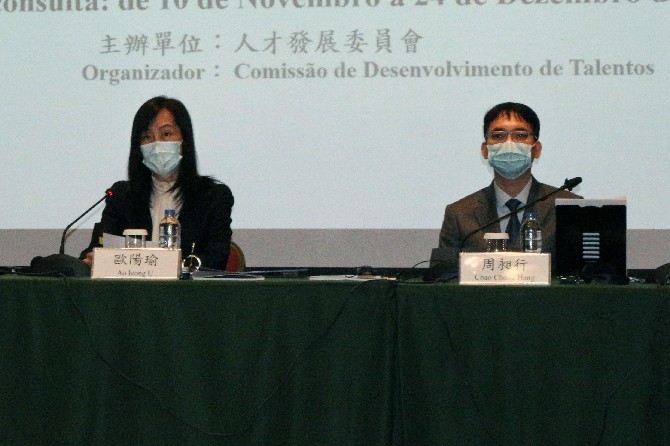 The new Regime for the Attraction of Qualified Personnel will aim to draw qualified Chinese people who are currently living overseas to live and work in Macau, the Secretary for Social Affairs and Culture, Elsie Ao Ieong revealed yesterday during a press conference on the draft system.
Questioned by the media on whether the government already has a list of preferred people to occupy such positions, Ao Ieong said, “We would like to attract the overseas Chinese to come to Macau.”
The Secretary also added that while there is no specific list of roles that the government is aiming to attract, she noted that there are several “specialists that we know can satisfy our [objectives],” since the government already previously engaged with these candidates and consequently holds existing knowledge of their suitability. However, she confirmed that these people are “obviously not my friends.”
Ao Ieong added that the government has not yet begun to invite these highly qualified people to join the program, “because we do not have yet the legal regime,” in an apparent contradiction to the idea of the system being presented at the press conference and entering into public consultation today.
According to the explanation provided just minutes earlier by both the Secretary and the Secretary-General of the Talents Development Committee (SCDT), Chao Chong Hang, the system is far from being an invitational one. Instead, it is an initiative by the local government that requires a formal application, following strict criteria and involving a relatively long process of evaluation, cross-examination, and selection, before a final decision is formally made by the Chief Executive (CE).
Still, the Secretary admitted that the government had certain iconic figures in mind whose decision to come to the region to live and work could improve economic diversification and enrich and highlight the public image of Macau.

Nobel prize winners and Olympic medalists wanted
In relation to the people capable of improving public relations for Macau, Chao mentioned that the government is interested in potentially attracting Nobel prize winners and Olympic medalists among other renowned and exceptionally talented people. Such people would fall under one of the three types of qualified professionals across the four priority areas of culture and sports, big health, high-end technology, and modern finance.
The government says that there are no quotas for individuals seeking to apply as “highly qualified professionals”, and every single person falling under this category would be considered.
As for the other two categories including “excellent professionals” and “highly specialized professionals”, the SCDT Secretary-General noted that the government aims to establish a maximum quota of 1,000 applications accepted per year.
This quota is equivalent to the upper limits established by other regions including the neighboring region of Hong Kong that has a population of about 10-fold that of Macau. When questioned on the rationale behind such a high limit, Chao said, “We know that people might think that this is too much since Macau is a small territory, but we need to understand that we are also at a less developed stage of talent attraction and economic development, so we need to attract more people to help us to develop the different sectors. After this has been done, we can consider [reducing] this quota.”
The public consultation period starts today and will be ongoing until December 24.

No solutions to retain current talent

In response to questions on the government’s decision to launch measures to attract new talent at a time when a large number of specialized workers – including local workers – are currently leaving or preparing to leave Macau, Secretary Ao Iong could not provide an explanation or solution for retaining current talent.
For Ao Ieong, the lack of economic diversification does not allow the retaining of such talent, and the official added that the purpose of such measures is to ensure that an exodus of highly qualified professionals will not be repeated in the future.