Over half of gaming workers concerned about jobs 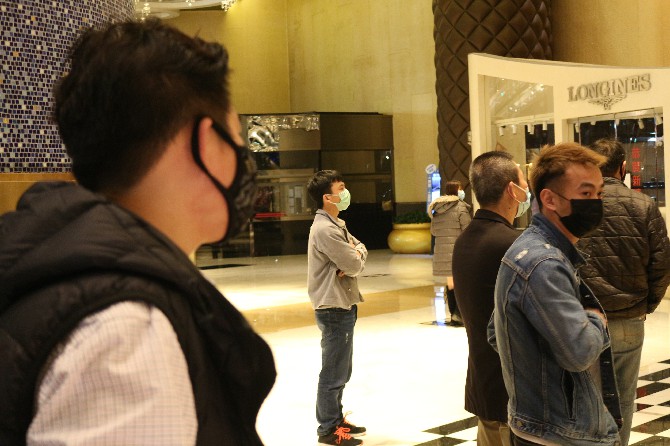 People watch the reopening of the Grand Lisboa casino

Over half of the local gaming sector’s employees have expressed concern about losing their jobs this year, according to a survey conducted by the Gaming Employees Home.
Between February 10 and 13, the association conducted an online questionnaire survey aimed at gaming sector’s employees. A total of 1,694 employees completed the questionnaires. Some 63.7% and 20.6% of respondents are, respectively, casino dealers and pit bosses.
Faced with the impact of the epidemic outbreak on the tourism and gaming industry, 53.1% of respondents reported being worried about an eventual layoff this year, while only 15.6% said they were not worried.
On Wednesday, President of the New Macau Gaming Staff Rights Association Cloee Chao said that two of the city’s six gaming operators have already granted paid leave to workers who will not be resuming work for the time being. The remaining four gaming operators have requested that their casino workers take unpaid leave or annual leave in advance.
Workers from one of the gaming operators claimed that their employer even requested they take annual leave from the 2021 calendar year in addition to this year.
The survey results also showed that the majority of local gaming workers worry about their remuneration. The majority of respondents (75.5%) are worried about salary and benefit cuts within this year, whereas only 8% said they do not have such concerns.
Between February 5 and 19, Macau’s casinos were shutdown. During this period, 94.2% of casino workers were completely off duty. Of these off-duty respondents, 10% have not set foot outside their homes, whereas 72.1% left home one to three times each week. About 82.7% of respondents went out to do grocery shopping.
The survey indicates a significant change in casino workers’ mental attitude towards the epidemic before and after the casino shutdown. The number of people who worry about the epidemic significantly dropped after the casinos were closed.
Before the shutdown, 80.7% of respondents were worried or very worried about getting infected. After the shutdown, only 47.9% were worried about infection. Nearly half of the gaming workers continued to experience anxiety in the past week.
The city’s casinos reopened at midnight on Thursday. Gaming Employees Home is urging the casinos to intensify the health inspection of their customers. The association also wants the gaming operators to reveal work schedule arrangements for workers and to make no-layoff promises.