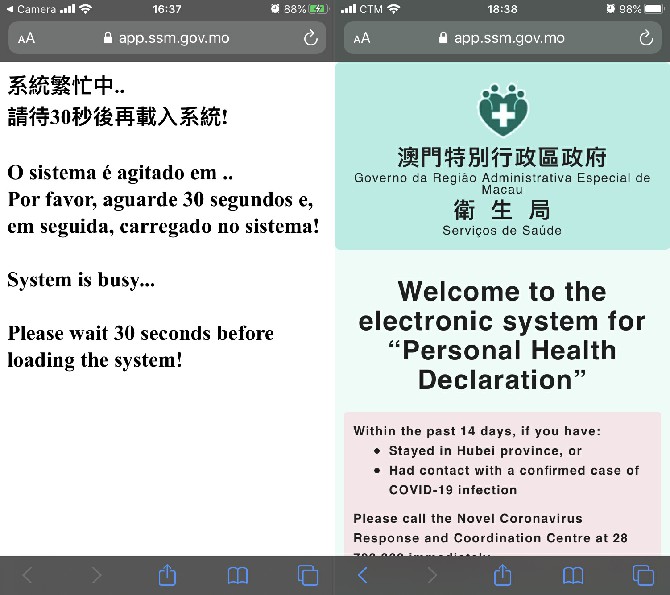 The Health Bureau’s (SSM) electronic system for Personal Health Declaration registered several problems yesterday.
People who wanted to access public services, casinos, and other venues in which the form-filling was required experienced difficulties as the system was blocked and displayed a message stating that the system was busy, requesting users to wait 30 seconds before trying again.
In a statement, the Novel Coronavirus Response and Coordination Centre came forward to acknowledge the problem, saying that from about 9 a.m. yesterday there was an issue with the service that led to its suspension for maintenance.
The health authorities also said, “system technicians are trying to solve the situation as quickly as possible,” and that “in cases where declarations cannot be made electronically, the Novel Coronavirus Response and Coordination Centre informs that they can be made orally. We apologize for the inconvenience caused.”
Around two hours later, the Center rushed to issue a new statement informing that the electronic system for Personal Health Declaration had resumed operation from 11 a.m. However, a large number of netizens and the Times realized that the electronic application continued to suffer from glitches and was malfunctioning at least until around 5 p.m. on the system’s mobile application, which is the platform that is mostly used by citizens.
Questioned on the case by the media, the coordinator of the Center, Leong Iek Hou, said during the daily press conference that the information technology team has handled the case and finetuned the webpage used for the declaration form. According to Leong, “the problem should not occur again.”
In the meantime, the desktop version of the application seemed to have been successfully restored and was working without issues throughout the day.
Completing a Personal Health Declaration form is mandatory for all people visiting government services and departments and is also a requirement to enter all gaming venues. Many other private services and companies are also adopting the application to register the health status of their employees on daily basis. A large number of civil servants are asked to complete the form every day before starting their work duties in public service.