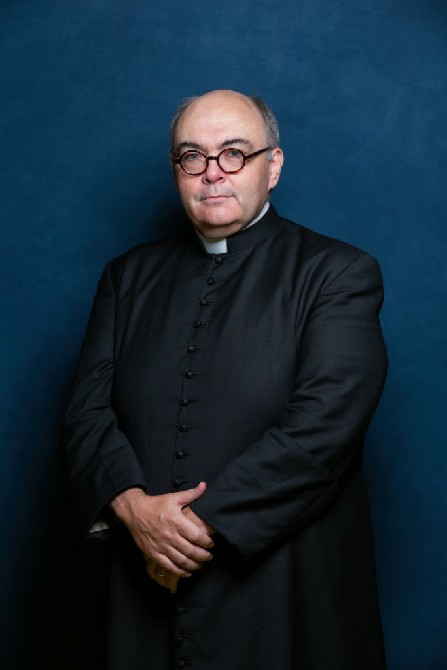 For the newly-appointed Rector of the University of Saint Joseph (USJ), Rev. Deacon Stephen Morgan, some “very significant steps” will be made in the higher education sector in the next few years.
In an interview with the Times, Morgan said that Chief Executive Ho Iat Seng’s promised educational reform was quite clear in scope and would bring major change if the city is able to attract a truly international cohort of students.
“My mandate is four years. At the end of those four years I will expect that there will have been very significant steps forward in that respect, irrespective and regardless of what happens at the USJ,” said Morgan, who now heads Catholic institution.
The Times sat down with Morgan to understand his vision for the USJ and what he thinks of higher education reform in Macau.

Macau Daily Times (MDT) – What are the prospects for the USJ under your leadership?
Stephen Morgan (SM) – I think the university has enormous potential.
The kind of Latin temperament of Portuguese, that capability to see the big picture and be inspired by it. We have a lot of English speakers and English-speaking culture is very pragmatic, and of course the Chinese are enormously thorough people. When you put those three things together, you can have one of two results: you can have an enormous fight between the three cultures, or you can actually have something quite special. And I think there’s something really quite special here. It’s a cultural encounter without any sense of superiority from one culture to the other, and a real desire to engage with the other cultures positively and learn from them.
It also means recognizing your shortcomings. So I think that means the prospects of the university are good. But we are a university that is manifestly international. By international, we mean students and stuff from all over the world.
There is a slight distortion here, as sometimes some universities count mainland Chinese students as international. They manifestly aren’t. We are in China. It’s one nation. So if you’re Chinese and you’re here, you are not international. You might be from another community, but you are not international. Well, [so far] we haven’t been able to do that [attract mainland students].
MDT – What is the university’s plan for attracting mainland students?
SM – Well it’s something that’s not easy to get to the bottom of. We’ve never been allowed to admit mainland students, so we have to carve out a future for the university that isn’t dependent on them, and that’s fine.
I think we’ve got a slightly complementary perspective to offer China. I understand full well that in order to convince the Chinese, and I mean both the Chinese government and the Chinese people, […] you have to build a relationship of trust first, and you can’t force the pace of trust.
Our relationship with a number of universities on the mainland, particularly with a group of scholars at Renmin University of China in Beijing, is very good and we’re trying to find concrete ways of expressing [that] as we work with one another.
I hope that in time it demonstrates to both the authorities here Macau and the authorities in Beijing that we are a trusted partner. If that means in two, three, four, five or 10 years’ time we have a cohort of mainland students here, it will be great.

MDT – What’s your interpretation of the Chief Executive’s vision for higher education, as announced in the policy address?
SM – There is a future. The Chief Executive has conceived of this vision for higher education in Macau very explicitly. Macau could become an international hub for higher education. I think what he said was quite clear in terms of the direction.
I think the most important thing that the Macau government can do is create an environment where that can happen. So that means, for example, dealing with people whose particular academic skills are not readily available here. Already, the financial conditions in Macau and the tax structure, for example, are very helpful in attracting academics. I think the other thing is that if one reads between the lines of what the Chief Executive said, […] it seems quite clear that he wants the universities here to be agencies for skills transfer to ensure that we build up a community of local academics in Macau who can compete on the world stage and attract people to Macau. I think that’s really important.

MDT – Is Macau ready to become an international hub for education?
SM – You don’t do that overnight. It’s not a 12-month project. It’s probably a 10- or 20-year project. Certainly, the tradition of public policymaking in China is much more long-term than it is in Europe and in North America. Here, there is a capacity to take a kind of long-term view. If we set the direction correctly, if we set the right policy objectives and follow through on those with the necessary policies and sometimes changes to the law, there’s no reason why it couldn’t happen. My mandate is four years. At the end of those four years I will expect that there will have been very significant steps forward in that respect, irrespective and regardless of what happens at USJ.

MDT – Is Macau, or its universities, international enough to form a new hub?
SM – That’s quite a difficult question to answer. There is a very high level of internationalization amongst the academics and the scholars working at all the universities. At the student level, it’s slightly distorted, as I said, by the fact that some ways of counting consider students from Zhuhai to be international.
But Macau is an easy place to be a non-Chinese. Although the base level of English may not be quite so high, it’s a lot better than it was 25 years ago. The physical environment of Macau, the way in which cultures have existed alongside one another for such a long time, means that it’s actually quite a comfortable place.
Is it international enough or ready? Probably not. Will it become more international? Well, if the universities take the Chief Executive’s challenges at face value and follow through with what he has asked us to do, then I’m sure they’ll become even more international. It’s entirely possible that in 20 years’ time Macau could be seen as the international hub of higher education in east Asia, in the same way that they’re trying to achieve that in Dubai in the Middle East.

MDT – What are admissions looking like for the upcoming semester, amid the impact of Covid-19?
SM – We have limits set for us by the DSES [the Higher Education Bureau], but I don’t think that’s going to be a problem for us. I think we’re about a month, maybe six weeks behind where we would be in a normal year because of the coronavirus. It’s been extraordinarily unsettling for everybody. The conversations that I’ve had with the other universities, and the headteachers and principles of secondary schools here is that students are a bit behind. I think that there will be a lower number of international students coming to Macau next year and that’s kind of inevitable. In some respects, that’s fine.