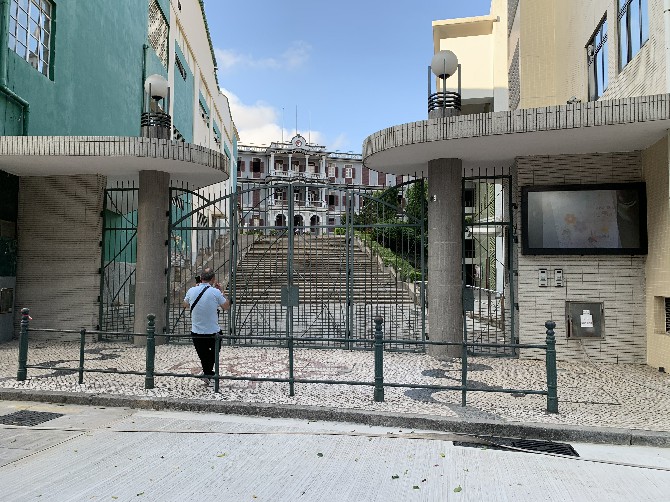 Students are enthusiastic to resume their formal studies,” Wong Ka Ki, head of the Education Department of the Education and Youth Affairs Bureau (DSEJ) said yesterday, when questioned about how many students applied for absence on the first day of senior secondary school resumption. Wong said that the bureau “has not received reports from any school.”
Some months ago, when the DSEJ first announced its desire to resume foundational education, it offered parents and students the choice of not returning to schools. The bureau said such absences should be handled with flexibility by schools.
It was because of this that the bureau official was so questioned at the Health Bureau’s daily press conference.
Wong described students as “happy” yesterday morning when they returned to classes. “Finally resuming school has made students happy,” said Wong.
Wong emphasized that the entire education team of the DSEJ has conducted visits to local senior secondary schools for site inspection and observation. He added that all 46 secondary schools would have resumed today, with 44 doing so yesterday.
Some journalists were concerned about whether primary education would resume in May, following the proposed resumption for junior secondary education a week from now.
Currently, daycare services are only provided by schools, under the arrangement of the DSEJ, to help working parents with the care of children so that they would not be left at home unattended.
Wong responded that work is being done in that respect. Once updates are available, the regulator will announce them.
Nonetheless, the bureau department head stressed that an announcement about primary school resumption would not be made two weeks in advance. “Because we have [allowed a 14-day buffer] in announcing the first phase of school resumption,” Wong explained. “We hereby remind students who are still out of Macau, in Zhuhai or Zhongshan, to return to their home as soon as possible.”
Failure to meet the 14-day quarantine period requirement will result in these students’ delay in resuming studies, the department head added.
When questioned by the Times about whether current measures would remain effective as the introduction of e-voucher has prompted a lot of people to venture out, Dr Lo Iek Long, medical director of the Conde São Januário Hospital (CHCSJ), said that it is impractical to put the city in extensive lockdown, despite the pandemic.
“There have been no new cases in the city for quite some time,” the doctor said. He then hinted that residents should learn how to live with the measures, as the operations of the city should basically return to normal.
“Our anti-infection measures have become a normality,” the doctor explained. “Local people should be cautious and conscious of the risks of infection.”
The doctor’s opinion is that people need to work, study and live. The authorities have to find a balance between fighting the disease and resuming normal life. According to the doctor, the phase in which urban lockdown is needed has passed, as that time was at the start of the outbreak.
He understands that after so long people must have lowered their guards slightly. Lo thinks shopping is acceptable at this time, although gathering in groups for dinner is still something that should not take place.
Recent events have exposed the city’s vulnerability to price hikes, as widely reported by netizens over the long weekend. When questioned by the Times about whether these price hikes could happen to facemasks as well, should the government decide to terminate the centralized mask supply scheme, Lo reiterated that the city will consider whether the scheme should continue indefinitely.
He stressed that the scheme was begun to ensure crucial supply. He believes his colleagues in the government’s economy and finance branch will respond to any suspected profiteering.
The medical director revealed that work is being done on amending the visitation time at the CHCSJ. The plan will be disclosed once complete, he said.