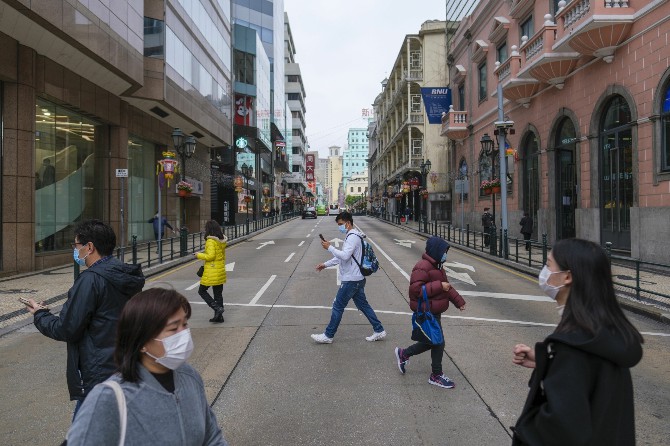 A slight increase in the number of tourist arrivals to the Macau SAR was recorded in the few days prior to the casino openings, which opened their gates to the public at midnight Thursday.
Data announced yesterday by the Public Security Police Force shows that from January 27 to February 19, Macau received a total of 220,000 tourist arrivals, representing a 92% year-on-year decrease.
As of 4 p.m. yesterday, there was a total of only 2,920 tourist arrivals going through the city’s immigration checkpoints – a figure lower than yesterday.
On Wednesday, the SAR recorded a total of 5,800 incoming tourist arrivals, nearly double that of the day before.
However, numbers may not recover anytime soon, as visitors from Macau’s top source market are still mostly blocked from traveling to the region due to the Chinese central government’s suspension of the individual visit scheme.
The Chinese government is still banning overseas tours and the purchase of flights and hotels abroad, calling on travel agencies to suspend package tours, which account for more than half of the country’s outbound travel.
The city’s tourism figures are therefore expected to be significantly down, at least in the first quarter or half of the year.
The tourism authority told the Times that it would need to revise a negative growth forecast for 2020 made last year.
“For the year of 2020, MGTO forecasted a decrease in visitor arrivals and will further revise the forecast in consideration of the coronavirus outbreak,” said MGTO. “Support measures for affected sectors are being considered and may come in due course, nevertheless, at this stage the priority is to first and foremost contain the virus.”
Since the Covid-19 outbreak, the SAR has turned into a ghost town, with usually crowded places seen with almost no residents or tourists walking around.
The outbreak of Covid-19 has affected travel and led to a decrease of 78.3% in visitor arrivals during this year’s Spring Festival, among which the major visitor source market – mainland China – dropped by more than 80%, while visitors from Hong Kong, Taiwan region and international markets have all reduced by half.
Around this time last year, the SAR was recording around 126,000 daily tourist arrivals, which means that arrivals for this month have fallen by about 96%.
Yesterday, Taiwanese budget airline Tigerair Taiwan said that it had extended its service cancellations for all its flights to and from Macau in April, while other flights to and from Southeast Asia have been cancelled until the end of March.