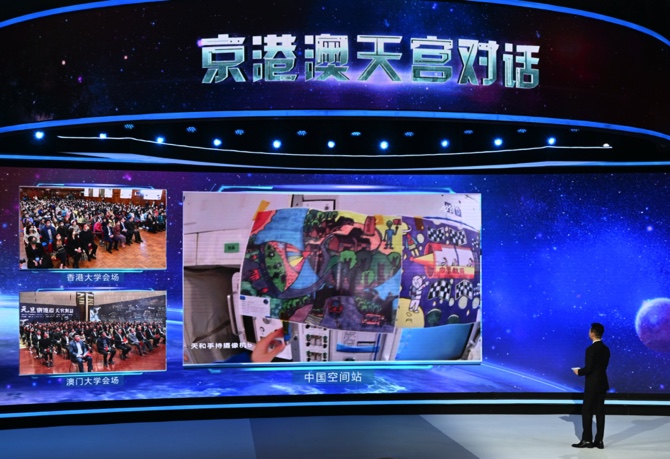 Photo taken in Beijing on Jan. 1, 2022 shows a screen displaying a painting exhibition held in space station Tiangong during a live space-Earth talk between Chinese astronauts and students in Beijing, Hong Kong and Macau

Three Chinese astronauts in space station Tiangong held a video chat with students in Beijing, Hong Kong and Macau on the first day of 2022.

The live space-Earth talk was attended by around 500 young students at the three venues. The astronauts shared their space dream and aspirations.

Astronaut Zhai Zhigang, commander of the Shenzhou-13 mission, shared his experience with the young people and encouraged them to overcome difficulties and dangers.

“No matter how far we fly, the motherland is forever our strongest supporter. Love for the country always inspires us in space flights,” Zhai said.

Astronaut Wang Yaping expressed hope that the live class from Tiangong could guide more young people to look up at the stars and plant the seeds of “loving science, pursuing dreams and exploring the unknown” in their hearts.

Wang earned the title of China’s first space teacher after delivering a televised science lecture during the Shenzhou-10 space mission in June 2013. While in the Shenzhou-13 mission, she and the other two crew members also gave a lecture in Tiangong in December 2021.

As China’s national space laboratory, the space station Tiangong is expected to play a unique role in encouraging the public, especially the youth, to explore space and carry forward the scientific spirit.

“Despite being weightless in space, we feel firmly grounded at heart,” said astronaut Ye Guangfu, a newcomer to space.

With the support of space professionals, painstaking trainings, and valuable experience from aerospace predecessors, Ye said that they have the confidence, determination and ability to accomplish the mission.

Tan Zuwei, student of the School of Aerospace Engineering of Tsinghua University, felt deeply impressed by the astronauts’ passion for their dreams and the space cause. He said he was inspired by their spirit and would contribute to the great rejuvenation of the Chinese nation.

Zhou Ting, a medical student from the University of Hong Kong (HKU), felt lucky to pose her question to the astronauts. “As a would-be doctor, I have been confronted with harsh study and work, and I sometimes thought of giving up. But the astronauts have given me the courage to carry on.”

Qian Chunzheng, a freshman from the Macau University of Science and Technology (MUST), said that he felt the care of the motherland for students in Hong Kong and Macau, and the development and progress of the country’s space cause. All this has enhanced their sense of pride and duty to the country.

“As we have our own space station right now, I believe that in the future, Chinese people will surely step further into deep space. As a student in Macau, I hope to contribute to the country’s space cause one day,” Qian added.

“Today’s event is a great gift sent to Hong Kong by our motherland. We are cheered up!” said Yeung Wai-Kwok, an HKU professor, adding that Hong Kong youth are expected to be down to earth, study hard, innovate and pursue dreams bravely, so as to become “stars” in the country’s space exploration.

A series of activities held in Hong Kong and Macau fully demonstrated the care from the central government. Young people in Hong Kong and Macau have realized that there is a vast space for them to bring their talents into full play, said Zhang Keke, head of the State Key Laboratory of Lunar and Planetary Sciences based at the MUST.

During the video talk, the trio also showed the people on the ground around a painting exhibition in the space station. Around 20 paintings drawn by teenagers from central and western China were displayed in the exhibition.

Prior to the talk, Cheng Tangming, chief designer of the Long March-7 carrier rocket system, answered questions from the students, and shared with them touching stories of how scientific researchers defeated difficulties and pioneered innovations.

“I feel very honored to be able to participate in this event, and I hope to do my part to contribute to students’ space dream and help them build up confidence in the country’s self-reliance in innovation,” said Cheng.

The three astronauts went into space onboard the Shenzhou-13 spaceship and entered the space station on Oct. 16, embarking on the country’s longest crewed mission for space station construction.

According to the plan, China will complete by 2022 construction of the country’s space station, which is expected to support long-term and consecutive manned stay. Crew rotation will be done in-orbit.  Xinhua