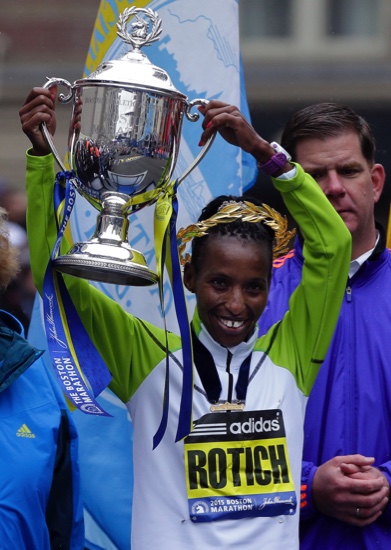 Caroline Rotich, of Kenya, lifts her trophy after winning the women’s division of the Boston Marathon

Lelisa Desisa ran through the rain to earn a second Boston Marathon victory and his first chance to enjoy it.
The 25-year-old Ethiopian broke the tape again on Boylston Street as the world’s most prestigious marathon tried to return to its routine two years after Desisa’s first Boston win was overshadowed by the twin explosions at the finish line.
“Lelisa did not get to have the kind of victory celebration that a champion of the Boston Marathon should have,” Boston Athletic Association spokesman Jack Fleming said, interrupting the post-race news conference to place the champions’ trophy at Desisa’s side. “Lelisa, we want you to get your due today.”
Desisa won the 2013 race just hours before two bombs killed three people and wounded 260 others, turning what should be the pinnacle of any distance runner’s career into an afterthought. On Monday, he finished in 2 hours, 9 minutes, 17 seconds to claim a golden olive wreath, the $150,000 first prize and a winner’s medal to replace the one he donated to the city in memory of the victims.
“This medal, I think, is for me,” said Desisa, who waved to the crowd as he sprinted past the bomb sites. “I took off my hat and started waving my hands because I love the Boston people.”
Kenya’s Caroline Rotich won the women’s race, beating Mare Dibaba in a shoulder-to-shoulder sprint down Boylston to win by 4 seconds on a cold and rainy day that thinned the crowds but didn’t lessen their enthusiasm for the city’s signature sporting event.
“I got to the last corner and I saw the finish line tape and I thought, ‘This is it, I’m not going to let it go,'” said Rotich, who won in 2:24:55 to collect $150,000 and give Kenya its fifth straight women’s champion. “I was like, ‘No, not today.’ And I kept going.”
Buzunesh Deba finished third a year after she came in second to Rita Jeptoo, who has been suspended after testing positive for performance-enhancing drugs. Desiree Linden was fourth and fellow U.S. Olympian Shalane Flanagan finishing ninth.
Desisa was in the men’s lead pack for the entire race, pulling away to beat countryman Yemane Adhane Tsegay by 31 seconds in the first 1-2 finish for Ethiopia in the race’s history. 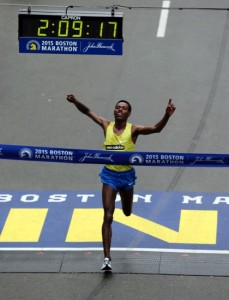 Lelisa Desisa, of Ethiopia, crosses the finish line to win the Boston Marathon

Kenya’s Wilson Chebet was third, another 34 seconds back.
Dathan Ritzenhein of Rockford, Michigan, was the first American, in seventh. Meb Keflezighi finished eighth a year after his victory — the first for an American man since 1983 — gave the city a tangible symbol of its comeback.
“I was crying on Boylston Street, because it was bringing up memories, good and bad,” said Keflezighi, who wrote the names of the bombing victims on his race bib last year. “People were cheering like crazy, saying ‘U-S-A!’ I was chanting with them.”
The 2004 Olympic silver medalist, who will turn 40 next month, was among the leaders until the 35-kilometer mark, when he took a drink of water that went down the wrong way. He had to stop five times to vomit.
“The crowd was phenomenal,” he said. “I’d stop for a few seconds and they’d scream, ‘Keep going!'”
With many of the runners wearing long sleeves and gloves to fight off the cold, Linden led for much of the women’s race. But she fell off the pace in the final miles as Rotich and a pair of Ethiopians pulled away.
After Deba fell behind at the final turn onto Boylston Street, Rotich and Dibaba ran together for the final quarter-mile, switching places before Rotich kicked into the lead for her first Boston title.
American Tatyana McFadden won her third straight women’s wheelchair race, and Marcel Hug won his first men’s title earlier Monday. Ernst Van Dyk, the most decorated Boston Marathon competitor in history, finished second in his attempt to win the race for an 11th time.
Security was visible but not intrusive for the second running since the bombings. State and local police, some riding bicycles and others on all-terrain vehicles, were supplemented by National Guard soldiers who walked alongside the road, applauding passing runners and occasionally reaching across the temporary fencing to high-five fans.
Officials were preparing for a crowd of 1 million spectators stretched along the route.
Like Desisa, they were looking for something to celebrate.
“Last year was important to have a better ending than that day in 2013, and to support Boston,” said Ramona Turner, who came from Winnipeg, Canada, to watch her husband run for the third year in a row. “This year, I’m here for the party.” Jimmy Golen, Sports Writer, Boston, AP