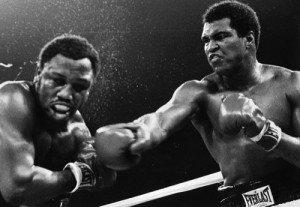 US boxer Muhammad Ali has retained the world heavyweight boxing championship after defeating his arch-rival, Joe Frazier, in their third and arguably greatest fight.
The so-called “Thrilla in Manilla” lasted 14 rounds before Frazier’s trainer, Eddie Futch, finally persuaded him to call it a day.
Ali said the fight was “the closest thing to dying”.
From the first bell the action was furious. Ringside experts classed it among the finest heavyweight title bouts – if not the finest of them all.
The 25,000 fans crammed into Manila’s Philippine Coliseum rose to their feet, cheering on Ali the champion, as he looked set for the kill.
But each time “Smokin’” Joe fought back, dipping under the champion’s longer reach.
By the 14th round, the challenger, tired and battered about the head, walked into a series of lefts and rights to the face and jaw and was knocked almost unconscious on his feet by 15 block-busting blows inside 45 seconds.
He made it back to his own corner, still on his feet, but looking badly bruised about the head, with swellings to the left side of his forehead and under his right eye.
His trainer called time but Frazier tried to protest.
There was a moment of indecision in the stadium as the crowd waited to see whether he would return to the ring.
Then came the announcement and there was total uproar as Ali’s team leaped into the ring to congratulate their man.
But Ali – who was staggering with exhaustion – fell to the canvas and had to be helped to his feet.
He told a news conference afterwards: “I’m so tired I want to rest for a week. My hips are sore, my arms are sore, my side is sore, my hands are sore.”
He paid tribute to his challenger as “the toughest man in the world”.
“I couldn’t have taken the punches he took. I would have given in long before.
“ I didn’t realise he was so great. He’s a real, real fighter.”
Both men are said to be contemplating retirement. Ali was guaranteed $4.5m for his fourth defence since regaining the title against George Foreman in Zaire last year.
Frazier, two years his junior, got $2m.

Ali and Frazier met three times in the early 1970s, including their Manila contest.
There was intense rivalry between them. Ali constantly assaulted his rival with verbal taunts and always outwitted him in public.
Ali resented the fact that Frazier was almost his equal in the boxing ring.
The two met for the first time in March 1971 in front of an all-celebrity audience including Barbra Streisand, Bill Cosby and Hugh Hefner, who were all ringside for the Madison Square Garden fight.
Frank Sinatra took photos for Life Magazine to ensure his prime position along the ring apron.
Smokin’ Joe won on points – but their next meeting in 1974 went Ali’s way. Their third and greatest match was the thrilla in Manila.
Frazier retired from boxing in 1976. Ali continued to fight until 1981.