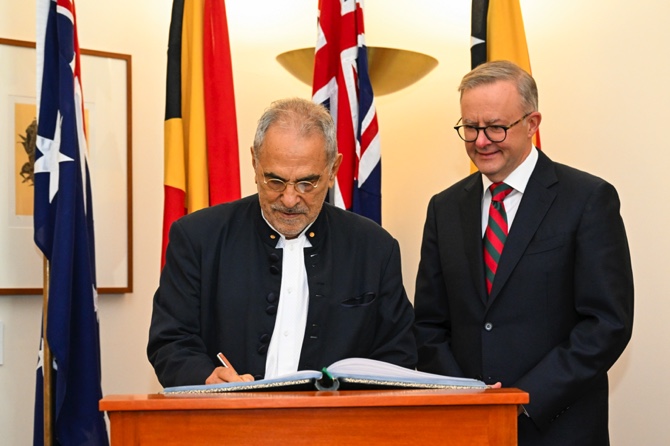 Give our country $100 billion — or stop lecturing us about making money from fossil fuels.

That was the message East Timor President and Nobel Peace Prize winner José Ramos-Horta had yesterday for those raising environmental concerns about his nation’s proposal to build a new gas-processing plant.

Ramos-Horta was speaking in Australia after the two countries signed a new defense agreement. He delivered his remarks at the National Press Club in Canberra with humor but also with an edge.

East Timor, an impoverished nation of 1.5 million, is hoping to break a 20-year deadlock with the new Australian government over the development of the Greater Sunrise gas field that lies beneath the seabed separating the two countries.

Australia wants the gas piped to an existing gas hub at its northern city of Darwin. East Timor expects more economic benefit if the gas is piped to its south coast.

Ramos-Horta was visiting Australia in part to try and resolve the dispute. A reporter asked how East Timor could justify the project given the climate impacts.

Ramos-Horta replied that gas was cleaner than some fossil fuels. He then listed countries that had benefitted from fossil fuels, including the U.S. and Japan, and then later China and India.

“But first the Europeans, you were the ones who polluted the whole world with coal, with oil, and everything that you can imagine,” he said. “And we, unfortunately, discover oil and gas only now. And the Europeans are lecturing us: We have to move away from fossil fuel.”

He said the gas field could generate $100 billion or more in revenue.

“I have no authority to make any proposal, but I can make one off the top of my head,” Ramos-Horta said. “The Europeans, Australia, the U.S., give us $100 billion and we give up on the Greater Sunrise development. As simple as that.”

The agreement aims to increase joint military exercises and training, as well as cooperation on humanitarian assistance and disaster relief.

“We have been working towards a DCA (defense cooperation agreement) for over a decade and today’s signing is a significant step forward in our partnership,” said Australian Prime Minister Anthony Albanese.

The agreement comes at a time of heightened tensions in the region, particularly after the Solomon Islands in April signed a new security pact with China.

Asked about his views on the move by the Solomon Islands, Ramos-Horta said he wasn’t that familiar with the nation but that the wider region is a “very sensitive strategic location.”

“Any leader that is serious about being a leader, you have to be sensitive to your neighbors,” he said. “Don’t bring in extraterritorial, regional interests, powers, that might not be welcomed by our neighbors.”