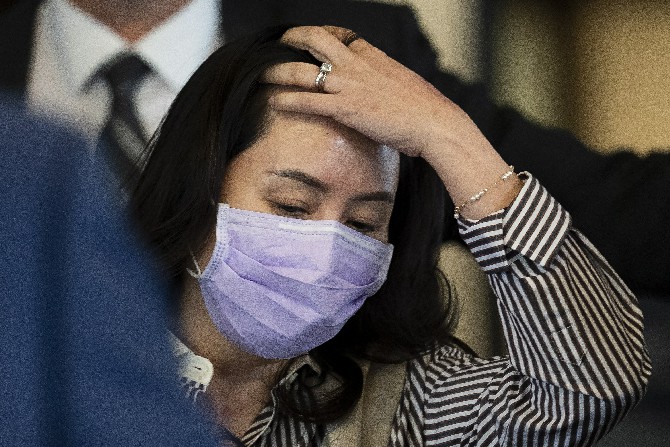 Lawyers for a senior executive for Chinese technology giant Huawei Technologies argued in a Canadian courtroom yesterday [Macau time] that U.S. authorities used a misleading summary that “cherry picks” evidence in requesting her extradition.
Canada arrested Meng Wanzhou, the daughter of Huawei’s founder, at Vancouver’s airport in late 2018. The U.S. wants her extradited to face fraud charges. Her arrest infuriated Beijing, which sees her case as a political move designed to prevent China’s rise.
The U.S. accuses Huawei of using a Hong Kong shell company called Skycom to sell equipment to Iran in violation of U.S. sanctions. It says Meng, 48, committed fraud by misleading the HSBC bank about the company’s business dealings in Iran.
Defense lawyer Scott Fenton said the case against Meng hinges on an August 2013 PowerPoint presentation made to a HSBC executive during a lunch in Hong Kong.
In making its case the U.S. accuses Meng of failing to inform HSBC during the presentation that Huawei controls Skycom.
Fenton argued that the U.S. tried to prove its point using selected slides. But if the full presentation is viewed, Meng said Huawei had a “normal and controllable” relationship with Skycom.
“It is seriously misleading by omission,” he said.
Fenton said Meng supplied enough information for HSBC to make its own decisions.
“She told them everything they need to know to measure sanctions risks,” he said.
Meng appeared in court for the first time since May. She was wearing a tracking device as part of her bail agreement. She began the day wearing a mask but removed it as court continued.
The proceedings are part of Meng’s arguments that the extradition proceedings should be halted because of an abuse of process.
Her lawyers claim Canada Border Services Agency officers detained and questioned Meng without a lawyer, seized her electronic devices and compelled her to give up the passcodes before her official arrest.
They argue the Royal Canadian Mounted Police acted at the behest of the FBI to gather and share technical information about Meng’s laptop, phones, and tablets, in violation of the Extradition Act.
In May, Meng failed in a bid to end the extradition process when a Canadian judge ruled the allegations against her could constitute a crime in Canada as well.
Meng’s arrest has soured relations between Canada and China. In apparent retaliation, China detained former Canadian diplomat Michael Kovrig and Canadian entrepreneur Michael Spavor. China has also placed restrictions on various Canadian exports to China, including canola oil seed.
Meng remains free on bail in Vancouver. The extradition case could take years AP