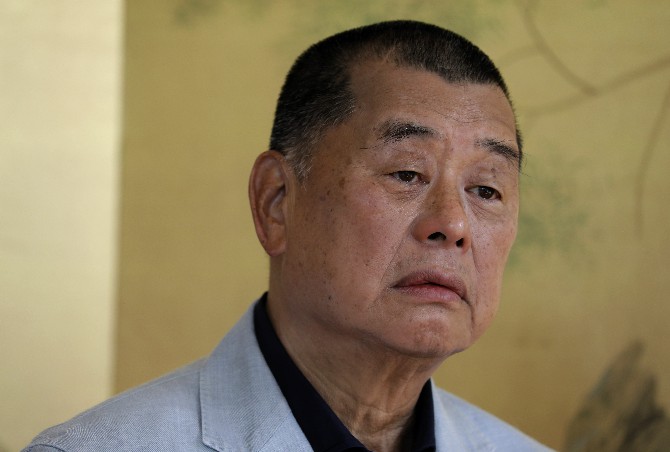 When Hong Kong media tycoon Jimmy Lai arrived in Hong Kong at age 12, the city felt like heaven to him, brimming with hope and freedom. He arrived poor, but over the years embarked on a rags-to-riches path from a garment factory worker to a wealthy businessman known for founding the popular Apple Daily newspaper and for being an outspoken pro-democracy activist.
“The hope I had (in Hong Kong) lasted for a long time, it made me who I am today,” Lai said in an interview with The Associated Press hours after a new Hong Kong national security law imposed by mainland China came into effect.
“(When I first arrived), I could feel it, it was so palpable, that I almost thought a great future was waiting for me.”
But that hope dimmed over the years, and with the enactment of the security law, Lai says the Hong Kong he once knew is dead.
“It’s worse than the worst scenario imagined. Hong Kong is totally subdued, totally under control,” he said. “It’s sad that Hong Kong is dead.”
The security law is seen by many as Beijing’s boldest move yet to erase the legal firewall between the semi-autonomous territory and the mainland’s authoritarian Communist Party system.
Under the law, anyone suspected of taking part in subversive, secessionist or terrorist activities, as well as colluding with foreign forces to intervene in the city’s affairs, could face a maximum punishment of life imprisonment. In some cases, mainland China will assume jurisdiction and suspects could be sent there for trial.
Lai said he will continue fighting for democracy, but it will now have to be in a “very different way.”
“We will have to see how many of us are left in the fighting camp,” he said, adding that many will be frightened away by the new law.
“We will have to stand up and be the backbone of the movement’s integrity, and the integrity of Hong Kong’s justice,” he said.
Lai declined to elaborate on how the pro-democracy movement will continue, saying that discussions are needed on how to move forward. He remained hopeful that Hong Kong will one day have democracy.
“Dictatorship of such extremes cannot last in today’s world, it’s impossible,” he said. “We have to persist, time is on our side. We are on the right side of history.”
Lai also condemned the security legislation for violating the rule of law in Hong Kong, still based on British common law.
“The details (of the law) are … very draconian but also very vague,” he said. “They’re saying the security law is going to be used for people who make trouble who are the tiny minority, and that common law will still be useful for commercial businesses and all that. But the two hands can switch at any time.”
The city will lose its status as an international financial hub because trust cannot be built when there is no rule of law, and businesses will have no protection, he said.
In the future, Hong Kongers will be very cautious about what they say on the phone and on social media, and will be careful whom they speak to, afraid that someone might turn them in, he said.
“This is going to be a very different society. I don’t think Hong Kong people, who are used to freedom and rule of law, will be able to adjust,” he said. “Many will leave.”
But he emphasized that he would stay, even if one day his family has to leave.
“I cannot (leave). If I leave, not only do I disgrace myself, I’d discredit Apple Daily, I’d undermine the solidarity of the democratic movement,” he said. “It’s something I have to take responsibility for.”
Lai became an outspoken advocate for democracy in Hong Kong after the bloody June 4, 1989, crackdown on pro-democracy protesters around Beijing’s Tiananmen Square.
“The reason I went into media was the idea that I will be able to deliver information, which equals delivering freedom,” he said.
He founded the Apple Daily tabloid in 1995, ahead of Britain’s handover of Hong Kong to China.
Like Lai, Apple Daily adopts a strong pro-democracy stance, often urging readers to take part in protests. On Wednesday, its front page denounced the security legislation, stating that the “evil law is the final nail in the coffin for the ‘one country, two systems’ framework” under which Hong Kong was returned to China.
Lai, together with 14 other pro-democracy figures, is currently facing charges of organizing and participating in several massive anti-government protests deemed unlawful last year. He says neither the prospect of prison nor the consequences of the national security law fazes him.
“If I have to go to prison, I don’t mind. I don’t care,” he said. ZEN SOO, HONG KONG, AP