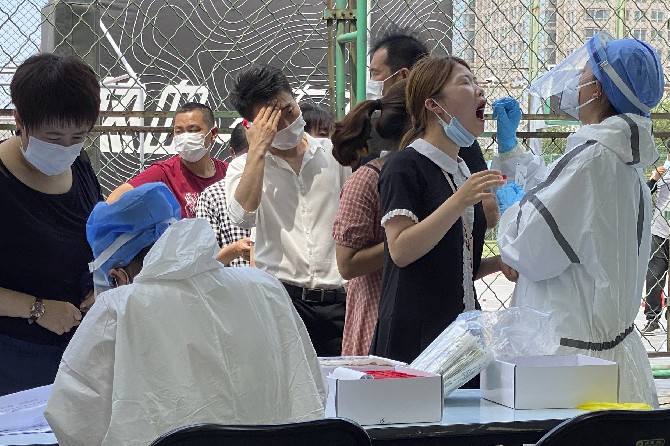 Chinese authorities locked down a third neighborhood in Beijing yesterday as they rushed to prevent the spread of a new coronavirus outbreak that has infected more than 100 people in a country that appeared to have largely contained the virus.
The resurgence in China highlighted public health expert calls for vigilance as many nations move forward with easing virus restrictions to revive their economies.
New Zealand, which hadn’t seen a new case in three weeks, said it is investigating a case in which two women who flew in from London to see a dying parent were allowed to leave quarantine and drive halfway across the country before they were tested and found to be positive. And the Philippines reimposed a strict lockdown on the city of Cebu after a rise in cases.
China reported 40 more coronavirus infections nationwide through the end of Monday, including 27 in Beijing, bringing the total to 106 in the nation’s capital since Thursday. At least one patient was in critical condition and two were in serious condition. Four cases were also reported in neighboring Hebei province, with three linked to the Beijing outbreak.
Most of the cases have been linked to the Xinfadi wholesale food market, and people lined up around the city for massive testing campaigns of anyone who had visited the market in the past two weeks or come in contact with them. About 9,000 workers at the market were tested previously.
The initial spread happened among market workers, Wu Zunyou, the chief epidemiologist at the Chinese Center for Disease Control and Prevention, told state broadcaster CCTV. He said that authorities detected the outbreak early enough to be confident they can contain it.
“For those who were infected, they will start showing symptoms either tomorrow or the day after tomorrow,” he said. “So, if there’s no sharp increase of newly reported cases tomorrow or the day after tomorrow, the outbreak this time will basically stay at the current scale.”
Authorities locked down seven residential compounds in Beijing’s Xicheng district, where the first case was confirmed on Thursday. They also barring residents of areas considered high-risk from leaving Beijing and banned taxis and car-hailing services from taking people out of the city.
The number of passengers on buses, trains and subways will also be limited and all are required to wear masks.
Fresh meat and seafood in the city and elsewhere in China was also being inspected, though experts have expressed doubt the virus could be spread via food supplies. Nonetheless, Chinese media reports said that salmon had been pulled from shelves in 14 cities including Beijing after the virus was found in a sample taken from a salmon chopping board at Xinfadi market.
The market has been closed for disinfection, as has a second market where three cases were confirmed. Residential communities around both markets have been put under lockdown, affecting 90,000 people in a city of 20 million.
China had relaxed many of its coronavirus controls after the ruling Communist Party in March declared victory over the virus, which was first detected the central Chinese city of Wuhan late last year.
The two women in New Zealand had been allowed to leave quarantine for compassionate reasons and traveled from Auckland to Wellington by car. Director-General of Health Ashley Bloomfield said that as part of their travel plan, they had no contact with any people or any public facilities on their road trip. AP