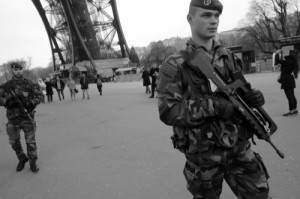 A gun assault on the Paris offices of satirical magazine Charlie Hebdo was the deadliest terrorist attack in France’s recent history. Some other terror attacks in Western Europe:
March 11, 2004: Bombs on rush-hour trains kill 191 at Madrid’s Atocha station in Europe’s worst Islamic terror attack.
July 25, 1995: In France’s deadliest previous attack, a bomb at the Saint-Michel subway station in Paris kills eight people and injures some 150. It was one of a series of bombings claimed by Algeria’s GIA, or Armed Islamic Group.
July 22, 2011: Anti-Muslim extremist Anders Behring Breivik plants a bomb in Oslo then attacks a youth camp on Norway’s Utoya island, killing 77 people, many of them teenagers.
July 7, 2005: 52 commuters are killed when four al Qaida-inspired suicide bombers blow themselves up on three London subway trains and a bus.
Aug 15, 1998: A car bomb planted by Irish Republican Army dissidents kills 29 people in the town of Omagh, in the deadliest incident of Northern Ireland’s four-decade conflict.
March 2012: A gunman claiming links to al-Qaida kills three Jewish schoolchildren, a rabbi and three paratroopers in Toulouse, southern France.
May 24, 2014: Four people are killed at the Jewish Museum in Brussels by an intruder with a Kalashnikov. The accused is a former French fighter linked to the Islamic State group in Syria.
May 22, 2013: Two al-Qaida inspired extremists run down British soldier Lee Rigby in a London street, then stab and hack him to death.
Nov 2, 2011: Offices of Charlie Hebdo in Paris are firebombed after the satirical magazine runs a cover featuring a caricature of the Prophet Muhammad. No one is injured. AP