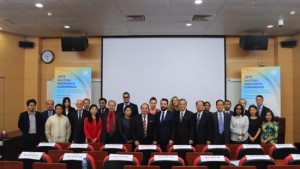 Legal experts and scholars from around the world congregated at the University of Macau (UM) on Monday to discuss the harmonization of trade law as part of the university’s second joint conference with the United Nations Commission on International Trade Law (UNCITRAL).
The conference held several discussions on international trade laws and how the harmonization of these laws could be conducive to the future development of the private sector.
Legal experts were present from a diverse range of countries, including Japan, South Korea, Australia, Singapore, Mozambique and India, as well as from mainland China, Macau, Hong Kong and Taiwan.
In addition, a number of scholars in attendance represented universities such as the University of Western Australia, the University of Melbourne, and the University of Hong Kong.
Representatives from the UNCITRAL’s Regional Centre for Asia and the Pacific, the Macau SAR government, the Macau Lawyers’ Association and UM spoke at the conference.
Professor Haydn Chen, vice-rector for student affairs at UM, said that the teaching and research functions of academics were inseparable at universities, and, as such, UM has aimed for cooperative research with other international research institutions.
The conference also saw the launch of a book entitled “Trade Development through Harmonization of Commercial Law,” co-authored by UM’s Professor Ramaswamy and Joao Ribeiro, the head of UNCITRAL’s Asia-Pacific centre.
Ribeiro delivered a keynote speech in which he discussed the importance of the recently adopted 2030 UN Agenda for Sustainable Development.
UM says that the conference’s proceedings will be published at a later date.