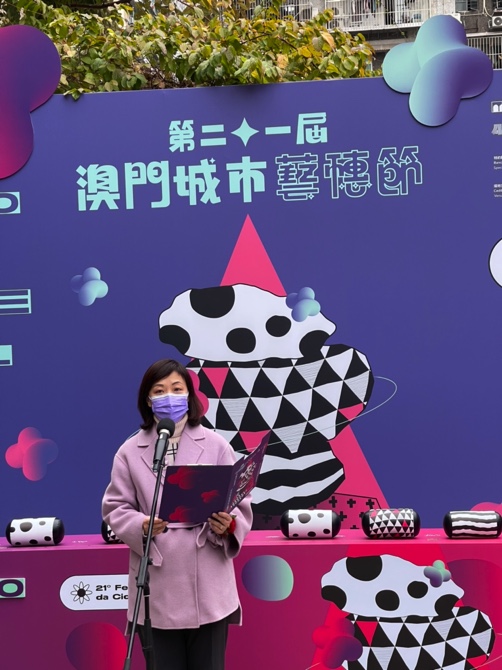 The 21st Macao City Fringe Festival opened yesterday at a vending area in Iao Hon, in a day which many enjoyed by playing chess, shopping and chatting with friends.

The opening ceremony was held in a leisure area opposite the St. Joseph the Worker Church.

Themed “Margin Break”, this edition of the Fringe Festival offers a series of programs for the public to experience different forms of art and to promote greater artistic exchanges in the community. This year’s Fringe Festival features less traditional genres and presentation of artworks.

Tickets for the 21st Macao City Fringe Festival are available through the Macau Ticketing Network.

On the sidelines of the opening ceremony, Mok Ian Ian, president of the Cultural Affairs Bureau (IC), was asked the reason why the event is taking place in Iao Hon: a traditional grassroot and relatively elderly district of the city, and how the bureau intends to promote arts and culture in the district.

In response, Mok reiterated that the principle of the IC is that culture is a matter for the general public, and that the bureau did not want to present culture as inaccessible. “We can actually see, in recent years, IC events have been made part of daily lives,” she said. “We hope various forms of arts can exist in various communities.”

She also restated that in past editions of the Macao Arts Festival, there has been at least one performance held in the Iao Hon Market Garden. “We want to bring arts to the doorsteps of people who don’t regularly approach arts,” Mok explained. “Especially when the Fringe Festival has the motto ‘The City as Stage, The Population as Audience’.”

The goal which the IC aims to achieve, Mok said, is that a grocery shopper can appreciate the arts while they are on the way to the shops or returning home. “We want to use the cultural base of Macau to build up an artistic atmosphere,” Mok added.