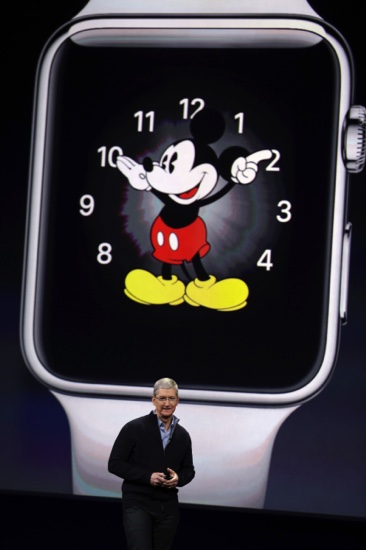 Apple Inc. is betting that its first new gadget in five years, a smartwatch costing from USD349 to more than $10,000, will offer the right blend of technology and luxury to lure even more customers and boost sales.
Apple Watch has a customizable face and will run 18 hours with typical use, Chief Executive Officer Tim Cook said at an event in San Francisco Monday (yesterday, Macau time). He was making the case for why consumers would want to add another digital product to their daily lives, highlighting the watch’s ability to track health, send notifications and serve as a status symbol.
“Apple Watch is the most personal device we have ever created – it’s not just with you, it’s on you,” Cook said. “Since what you wear is an expression of who you are, we designed Apple Watch to appeal to a whole variety of people with different tastes and different preferences.”
The watch will be available for preorder on April 10 and will reach consumers in Australia, Canada, China, France, Germany, Hong Kong, Japan, the U.K. and U.S. on April 24. It comes in two sizes, with the Sport model priced at $349 and $399 and the midrange version starting at $549. The high-end Apple Watch Edition starts at $10,000.
With the smartwatch, Cook is pushing Apple into a new product category that seeks to further immerse users into the company’s digital universe. As a health and fitness tracker, the watch opens new possibilities in the health industry. It also expands the number of devices that work with Apple Pay, the company’s new mobile-payments system. To fully work, the watch, which has a color touchscreen, needs to be paired with an iPhone running the latest software, iOS 8.2, which was released yesterday. The device shows text messages and e-mails, and offers features called “digital touch” that enable watch-to-watch communication. It can also track health and fitness information and send reminders.
Earlier at the event, Apple unveiled its thinnest-ever MacBook personal computer, weighing 900 grams and measuring 13.1 millimeters high. The notebook, which includes new technologies behind its keyboard and track pad, runs on an Intel Corp. chip, and comes in silver, gray and gold with a 12-inch retina display. Apple will ship the new PC on April 10 and prices start at $1,299.
Cook also announced an exclusive Apple TV partnership with Time Warner Inc.’s cable channel HBO for its stand-
alone service. HBO’s subscription service will be available outside of a traditional pay-TV package starting next month. Apple also cut the price of Apple TV to $69.  HBO’s streaming channel will cost $14.99 a month.
Cook also said Apple Pay, the company’s mobile-transaction service, is now supported by 2,500 banks. New applications for health and medical research were also unveiled, including diagnostic tools that can help patients with Parkinson’s disease and diabetes.
Apple Watch, first revealed in September, marks the first new gadget to be released since Cook became CEO in 2011. The new product, plus new larger-screened iPhones, have helped boost optimism about Apple’s growth, sending its shares to a record high in recent weeks.
The sophistication of the applications available will be key to wooing Apple Watch buyers. Just as the App Store has been a key reason for the iPhone’s success, tools for Apple Watch will help determine how customers use the gadget and whether it will be a sales hit.
A watch feature called glances, unveiled yesterday, provides a way to quickly check messages, calendar items, weather and what music is playing. New communication tools let users send drawings sketched on the watch to another Apple Watch owner.
The watch sends reminders if you have been sitting too long.
Health is a main focus for the watch. The device tracks daily movements and sends reminders if you have been sitting too long. At the end of the week it will send a report about how you did toward your goals and set new targets for the coming week.
“It’s like having a coach on your wrist,” Cook said at the event.
Demonstrating Apple’s push in to fashion, the Cupertino, California-based company showed a video of model and maternal-health advocate Christy Turlington Burns using the watch while running a half-marathon in Africa. Tim Higgins, Bloomberg