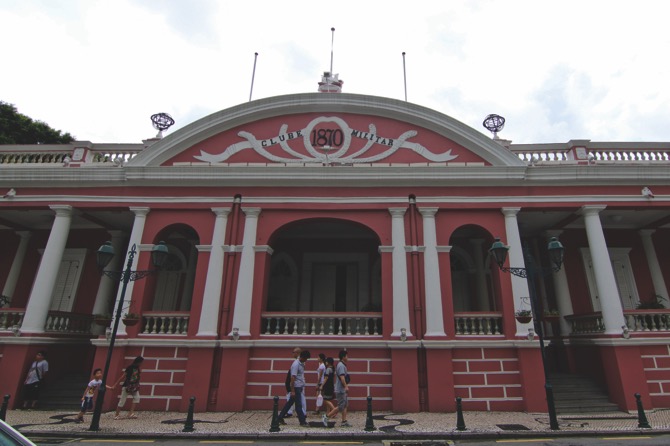 The “Lusophone Painters Exhibition” is currently being held at the Military Club of Macau until November 4, featuring 27 works from different Portuguese-speaking countries as well as Macau.

In the inauguration ceremony held recently, the president of the institution, Ambrose So, explained the meaning of the exhibition and its relation to the Military Club, saying, “We are very happy to have this exhibition as part of the [15th] anniversary celebration [of the establishment of the Forum Macau],” adding, “The ‘Meeting Bridges’ [title of the exhibition] is an important annual event of the club, which underscores the important function of our club as a meeting place for people and ideas from diverse geographic and cultural quadrants.”

So also noted, “As in past years, this exhibition features the work of a Macau artist, Lio Man Cheong, together with works from Angola, Brazil, Cape Verde, Guinea-Bissau, Sao Tome and Timor-Leste under the overall theme of unity with diversity.”

On the topic, the Forum Macau Secretary-General Xu Yingzhen said, “[the] Chinese have an old saying [that goes]: A flower blooming alone does not announce the spring. The spring only arrives when the garden is filled of a large variety of blooming flowers,” a metaphor to say that the artistic works in exhibition and its variety can also represent the blooming of the relations between the different countries and regions.

The representative from the organizing association, Associação para a Promoção de Actividades Culturais (APAC), José Duarte, noted the lack of an “obvious theme” in an exhibition that has the purpose of bringing together different artists from different backgrounds and cultural roots and experiences.

“What we are trying to show here is that in their diversity and their different contexts – social and economic – artists are expressing their views, their own approaches and ways of seeing the world in many different ways that we can share with them, enjoy and understand, and that is [in fact] the theme over the years,” he concluded.

The exhibition, sponsored by the Permanent Secretariat of the Forum for Economic and Trade Cooperation between China and the Portuguese-speaking Countries (Macau) is on display at the Commander Ho Yin gallery.