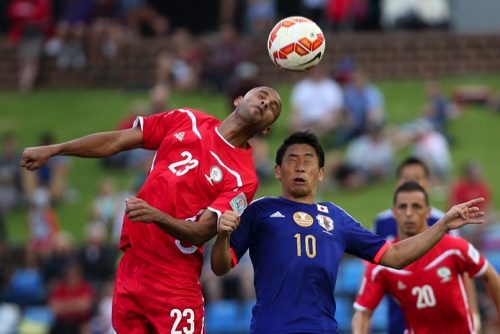 Defending champion Japan won its first match of this year’s Asian Cup, beating newcomer Palestine 4-0 yesterday in its opening Group D match.
Yasuhito Endo, Shinji Okazaki and Keisuke Honda scored in the first half to give Japan a big lead against the tournament debutants in wet and windy conditions at Hunter Stadium. Maya Yoshida scored after the break from Shinji Kagawa’s cross to complete the rout.
Ahmed Mahajna was sent off in the 73rd minute to make it a tough first tournament start for the Palestinians, who qualified by winning the 2014 AFC Challenge Cup in the Maldives.
Japan has won four Asian Cup titles in the past six editions and is seeking a record fifth continental crown in Australia.
The Japanese needed only eight minutes to score their first goal as Endo’s long-range strike beat Palestine captain and goalkeeper Ramzi Saleh’s dive.
The Palestinians then sat deep in defense to negate Japan’s intricate passing and movement but had no answer for Takashi Inui’s strong run and cross that found Kagawa, who sent a shot from the edge of the box. Okazaki stooped low with his head to deflect the ball past Saleh in the 25th minute.
It wasn’t until the 40th minute that the Palestinians managed a scoring chance with Ismail Alamour’s shot sliding wide of Eiji Kawashima’s goal. But then the defending champions scored again when Honda stroked home a penalty after Musab Battat pushed Inui in the box in the 44th minute.
Yoshida scored from a powerful header from Kagawa’s cross just after halftime.
The best chance for the Palestinians came in the 81st but Abdallatif Albahdari sent his strong header narrowly wide.
Despite the lack of chances, a small contingent of Palestinian fans in the crowd of 15,497 waved flags, beat drums and sang for the duration of the match. AP