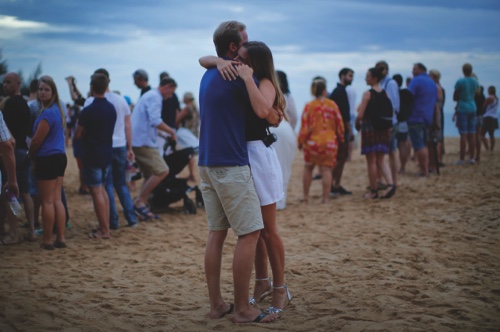 A commemoration ceremony Friday, Dec. 26, 2014 in Khao Lak, Thailand for the Swedish victims of the Asian tsunami, one of the deadliest natural disasters in world history

A packed train in Sri Lanka that was swept off the tracks by waves as big as elephants. A boat patrolling off Thailand’s shore hurled more than a mile inland. Streets in Indonesia turned into roaring rivers that carried people to their deaths.
Vivid and terrifying memories such as these were recalled Friday at ceremonies marking the 10th anniversary of the Indian Ocean tsunami that left nearly a quarter-million people dead in one of modern history’s worst natural disasters.
The Dec. 26, 2004, tsunami was triggered by a magnitude-9.1 earthquake — the region’s most powerful in 40 years — that tore open the seabed off Indonesia’s Sumatran coast, displacing billions of tons of water and sending waves roaring across the Indian Ocean at jetliner speeds as far away as East Africa.
Weeping survivors and others took part in beachside memorials and religious services across Asia, while some European countries also marked the anniversary, remembering the thousands of Christmastime tourists who died in the disaster.
Pain and hope alike were harvested from the tragedy.
“There is no need for anyone to remind us — the sorrow will be there until I stop breathing,” said Kapila Migelratne, a 50-year-old businessman who lost his 14-year-old son and his brother when the train they were riding was derailed along Sri Lanka’s shoreline. More than 35,000 people in Sri Lanka died in the tsunami, including as many as 2,000 in what is regarded as the world’s worst train accident.
In the southern Indian state of Tamil Nadu, where more than 6,000 people died, Liguvariyal Daveed — a tsunami survivor who lost her son, mother and two grandchildren in the disaster — said the fear from that day remains with her.
“Whenever we see the ocean, we get reminded of how this same ocean took away all these people,” she said at a memorial ceremony in the town of Kanyakumari. “You can’t even imagine how much we fear the sea now. We didn’t even want to stay close to it, so we moved … away from the sea, in a small house allotted to me by the government.”
In Europe, Swedish Prime Minister Stefan Lofven delivered a speech at a ceremony at Uppsala Cathedral, just north of Stockholm, to remember the 543 Swedes who died. President Joachim Gauck of Germany, which lost more than 500 people, said: “Locals and tourists found themselves in a situation in which they had a shared destiny, a bond which can still be felt today.”
Those at a memorial service in southern Thailand included European tsunami survivors, who were serenaded by a small orchestra and took part in a minute of silence and a candlelight ceremony. About half of Thailand’s 8,212 dead were foreign tourists, mostly Europeans escaping the winter cold.
The ceremony was held in the resort area of Khao Lak, next to a police boat that was out at sea when the tsunami struck and was carried 2 kilometers inland by the waves. The boat has become a permanent memorial to the power of the tsunami.
Many at the memorial ceremonies celebrated how people — locals and the international community alike — pulled together in the wake of the tragedy, saving strangers and launching a process to build back better.
Czech supermodel Petra Nemcova was vacationing in Khao Lak with her fiance, Simon Atlee, when the waves struck. He drowned and she barely survived with serious injuries, including a broken pelvis. After recovering, she founded the Happy Hearts Fund to rebuild schools devastated by natural disasters.
“Ten years ago, everyone who is present here today got connected in a very profound way, and through our experience, which we have shared, our lives have been connected ever since,” Nemcova told the crowd at Friday’s ceremony. “The 2004 tsunami didn’t connect just those of us here, but the whole world, as individuals, families and countries have been asking, ‘How can we help?'”
Thai Prime Minister Prayuth Chan-ocha noted that the tragedy “allowed us see the kindness and help that came from around the world that helped us pass through the difficult time.”
Indonesia’s Aceh province, which was closest to the quake’s epicenter, was hit first and hardest. Initially, the quake toppled homes and buildings and sent communities rushing into the streets in panic. 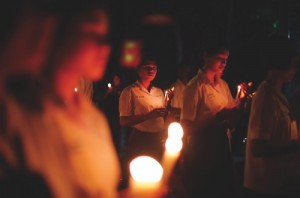 About 20 minutes later, a wall of water up to 10 meters (33 feet) high surged inland for miles with seemingly unstoppable force, carrying along trees, houses, train cars — and thousands of people — in a churning rush.
More than 170,000 people died in Indonesia alone, about three-quarters of the overall death toll.
Indonesian Vice President Jusuf Kalla led a prayer ceremony in Banda Aceh, the capital of Aceh province. He and other officials placed flowers at a mass grave where thousands of unknown tsunami victims were buried.
“Here in this field 10 years ago … we tearfully saw thousands of corpses lying,” Kalla said. “No words can describe our human feelings at that time — confused, shocked, sad, scared — in seeing the suffering of the people in Aceh. But we could not remain in sadness. Aceh had to rise again, and all Indonesians in this archipelago helped, and people all over the world offered their assistance.”
In Sri Lanka, survivors and other mourners took a memorial journey to honor those lost in the train accident.
The Queen of the Sea was chugging down Sri Lanka’s palm-fringed southwestern coast, headed from Colombo, the capital, to the town of Matara, about 150 kilometers (90 miles) away, when the tsunami struck. Waves described by survivors as being as big as elephants enveloped the train, lifting its cars off the track into a thick marsh in Pereliya village.
The dead included more than 400 villagers who tried to escape the waves by climbing on top of the eight-coach train. Only a few dozen passengers are believed to have survived.
The memorial ride on Friday included the train’s original Engine 591 and five restored coaches. They were decorated with Buddhist flags for the occasion, and Buddhist chants were played throughout the journey, which replicated the train’s ill-fated route.
At a memorial in Pereliya, Buddhist, Christian and Hindu rituals were performed and tearful relatives lit candles and offered flowers.
Shanthi Gallage, along with her husband and two daughters, was riding home on the train after a Christmas visit to relatives when the waves struck.
She saw her husband alive, trapped under a log, when she set out to find her daughters. But later she was told that her husband had died and been buried in a mass grave. She found one daughter, but never found the other, who was 13.
“I believe that she is alive and someone keeping her will return her to me today,” said Gallage, who carries portraits of her husband and missing daughter. “There are people who tell me to forget about it, but I don’t talk to them anymore. When I try to give it up, something prompts me not to, and I pray and search for her.”
Ten years ago, Macau people were also hurt by one of the deadliest natural disasters in world history. 5 Macau residents died on the shores of southern Thailand, while tens of other local vacationers, also hit by the destructive waves, survived the Asian tsunami. Krishan Francis, Pereliya, MDT/AP