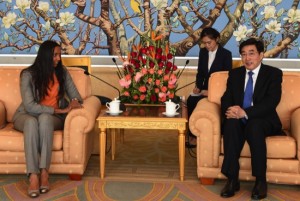 Guo Jinlong (r), a member of the Political Bureau of the CPC and also Beijing’s Party chief, met recently in Beijing with a Cape Verde delegation led by Chairman Janira Fonseca Almada (l), who is also the country’s Minister of Youth, Employment and Human Resources,

Cape Verde and China yesterday began the 2nd meeting of the Joint Commission for Cooperation, Economic, Commercial and Technical Cooperation between the two countries during which Cape Verde plans to attract Chinese investment, the archipelago’s press reported.
Citing an official statement issued in Praia, the press announced that the Cape Verdean delegation was led by the Minister of Tourism, Investment and Business Development, Leonesa Fortes, as part of an official visit to China.
During the meeting, Fortes will seek to attract and facilitate partnerships between Cape Verdean and Chinese companies interested in marine resources (algae) in the stone industry – pozzolan, ornamental stone and gravel – and minerals, including salt and to raise funds as an alternative to traditional financing for high risk projects.
The visit includes several meetings with Chinese entities, such as the Development Bank of China, Export Import Bank of China, China National Tourism Administration, the China Council for International Investment Promotion, telecommunications group Huawei, the Hangzhou Chamber of Commerce and a courtesy visit to the mayor of Shanghai.
Despite the one-way trade relationship with China, Fortes said in the context of the Economic Community of West African States (ECOWAS) there were a number of opportunities to explore that required investment, which is why Cabo Verde wanted to attract Chinese companies.
The two sides will review their diplomatic relations, take stock of the impact of China’s cooperation on the economic and social development of Cape Verde and monitor the measures announced by the Africa/China Cooperation Forum, the Forum for Economic and Trade Cooperation between China and Portuguese-speaking Countries (Macau Forum) and projects that are underway and in the pipeline.
Fortes said she would present new projects to China, and that access to finance by capitalizing national funds could become an alternative to traditional sources of financing for major growth and high risk projects.  MDT/Macauhub