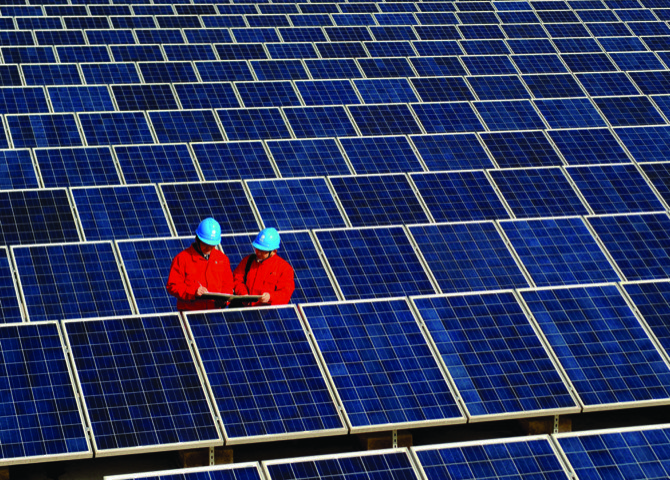 One of China’s biggest makers of solar panels said yesterday it will invest USD309 million to expand manufacturing in India in a move to guard against what it complained is a rising threat of import controls in the United States and other markets.

Longi Solar Technology Ltd.’s announcement follows the Trump administration’s Jan. 24 decision to impose an extra 30 percent duty on imported solar modules. An Indian regulator says it is considering a “safeguard tariff” of 70 percent on solar panels from China and Malaysia.

Chinese manufacturers dominate global solar panel production. Their explosive growth has helped to propel adoption of renewable energy by driving down costs. But the United States, Europe, India and others complain unfairly low-priced exports hurt their manufacturers and threaten thousands of jobs.

The United States, Europe and other non-Chinese markets account for only 10 percent of Longi’s sales, according to its strategy director, Max Xia. But he said Longi wants to promote global sales of its latest technology this year.

“We think sooner or later anti-dumping and trade protection will be happening in several countries,” said Xia at a news conference. “This is why we choose to do the investment in Malaysia and also in India, because we don’t know when and where it will happen, this kind of anti-dumping. So we prepare to counter it.”

Xia’s comment represented an unusually explicit statement by the Chinese industry that it is moving production to avoid trade controls. Other Chinese producers have set up factories in India and Southeast Asia but usually say they are getting closer to customers or taking advantage of local talent and supply chains.

That migration has complicated efforts by the United States, the European Union and other governments to control imports from China.

Some Chinese solar manufacturers responded to earlier U.S. and European trade measures by supplying those markets from factories outside China, avoiding higher tariffs and quotas on Chinese-made products.

Longi already has a solar module factory in the Indian state of Andhra Pradesh. The latest investment will double production there, the company said.

“That possibly could start a ‘green energy trade war,'” he said. “That is, with the whole world concerned about climate change, what people who want to solve energy problems and realize green development aren’t willing to see.”

Longi, headquartered in the western city of Xi’an, ranked No. 7 among global solar panel producers by 2017 output, according to PV Tech, an industry journal. The South Korean-German supplier Hanhwa-Q Cells was the only non-Chinese competitor in the Top 10.

India is regarded by the solar industry as one of the most promising markets but low-cost Chinese imports have undercut the New Delhi government’s ambitions to develop its own solar technology suppliers. Government data show imports, mostly from China, account for 90 percent of last year’s sales, up from 86 percent in 2014.

India’s Finance Ministry said Jan. 5 it was considering adding a temporary 70 percent “safeguard tariff” on solar equipment from China and Malaysia to prevent “further serious injury” to the Indian industry. The ministry said Chinese exporters shifted their focus to India in early 2017 after the United States and Europe stepped up import controls. Joe McDonald, Beijing, AP

China’s senior foreign policy adviser will meet with U.S. Secretary of State Rex Tillerson later this week, state media reported, amid concerns over North Korea and growing trade tensions. The official Xinhua News Agency gave no further details in its report this week, but the meeting between Tillerson and Yang Jiechi comes as both sides are upping pressure on North Korea over its nuclear weapons program. China has long been the North’s main economic and diplomatic partner, but has also backed increasingly strict U.N. sanctions on Kim Jong Un’s regime. The statement cited foreign ministry spokesman Geng Shuang as its source. He said Yang, a state counselor and former foreign minister, would visit the U.S. on Thursday and Friday. The visit comes amid rising U.S.-China economic tensions underscored by Washington’s move to raise tariffs on imported solar modules, most of which come from China.