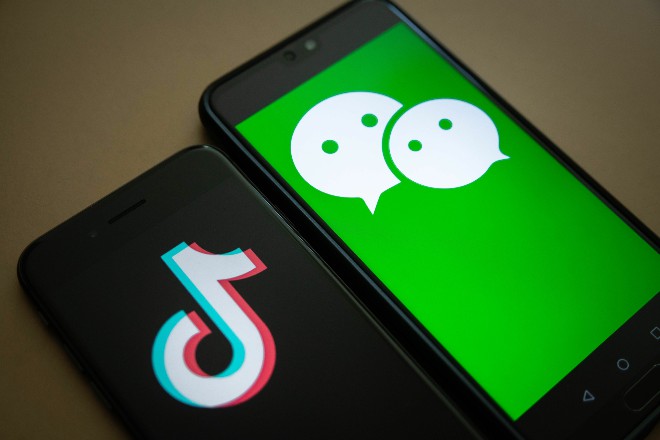 U.S. and Chinese negotiators plan to discuss progress of their trade deal in the coming days, with Beijing pushing to widen the agenda to include Washington’s recent crackdown on businesses including TikTok and WeChat.
A virtual meeting will likely take place as soon as this week though a date hasn’t been finalized, according to people familiar with preparations for the talks who asked not to be named. President Donald Trump’s chief economic adviser on Tuesday downplayed concerns the phase-one agreement will fall apart.
Along with agricultural purchases and the dollar-yuan exchange rate, Chinese officials intend to bring up Trump’s prospective bans on transactions with the two apps on national security grounds, the people said without elaborating about what China hopes to achieve by doing so.
Almost seven months after a White House signing ceremony paused a tariff war that had roiled the global economy, Beijing’s pledged purchases of U.S. goods are far behind schedule. The coronavirus crisis and the deterioration in U.S.-China relations on everything from tech security to Hong Kong has left trade a rare area of cooperation.
The “one area we are engaging is trade,” Larry Kudlow, director of the White House’s National Economic Council, said at a White House press conference Tuesday. “It’s fine right now.”
At a briefing in Beijing on Wednesday, Foreign Ministry spokesman Zhao Lijian said China’s position on phase one remains consistent. TikTok, he said, “is just a platform for providing entertainment, leisure, the show of talents and sharing for American people and people around the world. It has nothing to do with national security.”
In the U.S., Trump’s treatment of China is emerging as a political weapon for Democrats trying to unseat him in November. It was three years ago this month that the Trump administration initiated an investigation into China’s treatment of U.S. intellectual property that would help form the foundation of a trade war that would lead to tariffs on some $500 billion in products shipped between the world’s largest economies.
Now, less than three months before Trump’s re-election bid, the pandemic that originated in China has his administration struggling to find the balance between showing toughness and clinging to an agreement that isn’t delivering on Beijing’s promises.
Scott Kennedy, a China expert at the Center for Strategic and International Studies in Washington, told Bloomberg Television this week that “it’s amazing that despite the storm that is now the U.S.-China relationship, neither Trump or Xi Jinping really want to junk the phase-one deal.”
“For Trump, in a word, it’s about farmers – the sales that they can make for red states in this election,” Kennedy said, referring to rural strongholds for Republicans. For Chinese President Xi, “it’s about stability and keeping the relationship from entirely collapsing,” he said.
China is seeking to defuse an unpredictable confrontation with the U.S. that’s seen several of its tech champions targeted, with the latest actions spurring a potential sale of the U.S. operations of ByteDance Ltd’s wildly popular short video app to Microsoft Corp. Trump is also banning U.S. transactions with Tencent Holdings Ltd.’s WeChat app, which has more than 1 billion users.
Trump’s executive orders, set to take effect in September, have potentially an even wider impact than the multi-pronged assault on telecommunications hardware provider Huawei Technologies Co., as they threaten to sever communication links among the people of the world’s biggest economies. The U.S. argues that Chinese apps which collect information on U.S. citizens pose a grave national security risk as the data is prone to being acquired by the Chinese government.
Given the collapse in the global economy this year tied to the pandemic, which Trump has repeatedly blamed on China, Beijing was only a quarter of the way through its effort to buy more than $170 billion in U.S. goods this year by the end of June.
On Tuesday Kudlow downplayed the shortfall, saying China had “substantially” increased purchases of U.S. goods.
China would need to buy about $130 billion in the second half of this year to comply with the original terms of the agreement signed in January, which laid out purchasing an additional $200 billion of U.S. goods and services over the 2017 level by the end of 2021. Bloomberg

Tencent Holdings Ltd. boosted revenue at the fastest pace in two years, defying an economic downturn in China as it prepares to face a ban on its WeChat messaging app by U.S. President Donald Trump. Sales rose 29% to 114.9 billion yuan ($16.5 billion) in the three months ended June, beating estimates with a surge in online gaming revenue. China’s biggest social media company has benefited from an internet resurgence during Covid-19, though it still faces a U.S. ban on its WeChat service with potentially far-ranging impact. It won approval from Beijing to earn money from Call of Duty Mobile, the smartphone version of a long-running franchise that will underpin its gaming business, and has charted a line-up of new titles for 2020 to shore up resilient franchises Peacekeeper Elite and Honor of Kings.