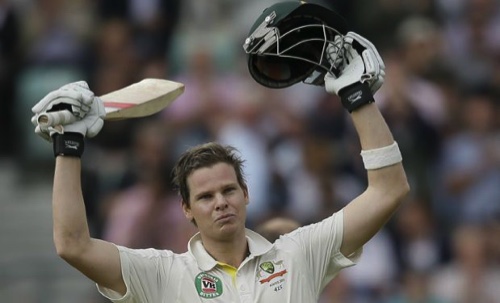 Steve Smith will begin his tenure as Australia’s youngest test cricket captain in more than 30 years with the blessing of the man he is replacing and of the senior teammate at whose expense he has been appointed.
Smith was named yesterday to captain Australia in the remaining three tests of its four-
test series against India in place of Michael Clarke, who has been forced to miss the rest of the series with back and hamstring injuries.
Smith was elevated to the role ahead of wicketkeeper Brad Haddin who was Australia’s vice-captain under Clarke and now becomes deputy to Smith.
Smith said Clarke had warmly supported his appointment and Haddin was “proud as punch” at his achievement.
At 25, Smith will become Australia’s 45th test captain when he leads the team onto Brisbane’s Gabba ground tomorrow and its third youngest captain ever, after Ian Clarke who was 22 when he was first appointed, and Kim Hughes who was also 25 but younger than Smith by several months.
Smith told reporters at a news conference that he had been in touch with Clarke who was excited at his appointment.
“He’s really proud of me,” Smith said. “He said to me this morning he’s really excited for me this week to lead Australia.”
In essence, Clarke remains the Australian captain and Smith has taken over from Haddin as vice-captain but will act as stand-in captain for the remainder of the India series in Clarke’s absence.
But the selectors and Cricket Australia high performance manager Pat Howard made it clear yesterday that Smith was preferred to 37-year-old Haddin because he is seen to be a more long term prospect in the captaincy role.
“I think the panel and the board have been strong in showing their hand and looking fora a longer term solution,” Howard said.
“The nature of Michael’s injury, and we’ll get a better prognosis over the next 24 or 48 hours, was a big factor in making this call.”
Chairman of selectors Rod Marsh said Haddin had been the first choice to replace Clarke, but the seriousness of Clarke’s injuries forced a change of approach.
“Brad Haddin has done an exceptional job as vice-captain since assuming the role last year and will provide strong support to Steve, just as he has done to Michael,” said Marsh.
Smith said he would lean on the experience of senior players such as Haddin as he eased himself into the captaincy.
“As a captain I think first and foremost I’ll try and lead from the front with my performance on the field and, in regards to tactics and everything, I think we’ve been pretty good this year,” Smith said.
“I know coming out here the senior guys will all support me 100 percent and I know Brad Haddin, who I’m very close with, as the vice-captain will be right behind me.”
There has been speculation for some time that Smith was favored as Clarke’s successor, even though the test against India starting this week will only be his 24th for Australia.
“I’m only a temporary solution at the minute because Michael’s out injured unfortunately. It’s just about going out there and backing myself to do well which is first of all scoring runs and leading from the front and also coming up with some good tactics as well,” Smith said. AP