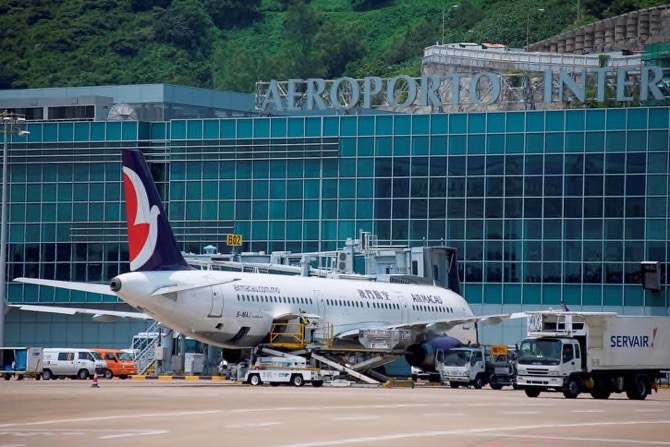 The Judiciary Police (PJ) has reported two recent cases of theft that reportedly took place on two separate flights bound for Macau. Both cases are nearly identical but it is not known if they are connected.

One of the two cases was unearthed on August 16. The victim told the PJ that they had flown into Macau at 8:40 p.m. from Beijing. Upon reaching his seat, the victim put his bag in the overhead luggage compartment. When he arrived in Macau, the victim took the bag and departed the plane.

The victim only found out that the money was lost after arriving at the hotel. The money was reported to be originally in the victim’s wallet. A total loss of HKD92,000 and RMB5,000 in cash went missing, according to the victim, who then reported the case to the police.

A second case happened on the previous day. The victim said they had flown into Macau at 10 p.m. that night, also from Beijing. The victim put her backpack into the overhead storage after reaching her seat.

Again, upon arrival in Macau the victim went straight to the hotel, where she realized the money from her bag had gone missing. The victim told the police that a total of RMB1,000 and HKD67,000 in cash was missing.

Both victims suspected the alleged thefts occurred on the plane.

The PJ did not give details as to which flights the respective victims took. Personal information was also not released.

A young male in his twenties met a woman on an undisclosed instant messaging platform and, after conversing with her, learned that the woman was willing to provide sexual services in exchange for 800 patacas.

The two made an agreement to meet at 10:30 p.m. that night at the entrance of a residential building in Areia Preta.

When the victim arrived at the scene, he received a message from the woman, requesting him to buy a gaming card that was worth MOP799 at a convenience store. The woman explained to him that it was to both secure his payment and avoid being caught by any undercover police.

The victim then sent the receipt to the girl as proof, as requested by the woman. Afterwards, he was called by a man, who asked him to buy another gaming card that was worth MOP1,066 as a deposit. The man calling stressed that the deposit amount would ensure the safety of those involved in the transaction.

But the victim kept receiving requests to purchase extra gaming cards, with the excuses and justifications varying according to the messages from the scammers.

Once he realized he was being scammed, the victim reported the events to the police. A total of MOP28,504 was lost, as reported by the victim. The PJ said that the victim was a student.

A similar case was also reported by the PJ, involving a male renovation worker in his 20s who was connected to a woman through a mutual friend and informed that the woman was willing to provide sexual services.

Having struck their deal on an instant messaging platform, the woman told the victim she would charge MOP800 for the service.

They agreed to meet at 2 a.m. near a building in the Fai Chi Kei area. As in the previous case, the victim was contacted by a male stranger upon arrival, who told him to buy MOP800-worth of gaming cards as a deposit. The stranger also promised him that the deposit would be returned after the service.

Afterwards, he kept being contacted by the same man, telling him to buy extra gaming cards. He was told to buy altogether 38 gaming cards that were worth MOP50,000. The scammer threatened to cause harm to the victim’s family if he refused to follow the man’s instructions.

The victim, suspecting that he had been scammed and worried about his family’s safety, decided to file a case with the police. He reportedly lost MOP58,000. Anthony Lam