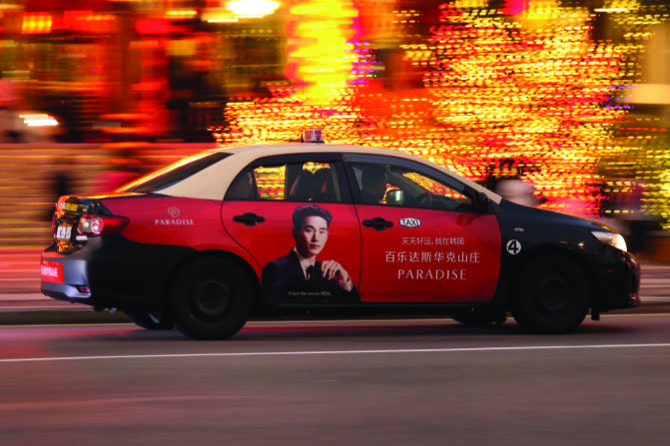 A 73-year-old taxi driver stands accused in a case of “hit-and-run” involving a female tourist from the mainland that he had just transported from Taipa to Rua de 5 de Outubro in the Peninsula, the Public Security Police Force (PSP) spokesperson revealed yesterday during the joint press conference held at the Judiciary Police (PJ) headquarters.

According to the report of the incident, two women entered into the taxi in Taipa on June 6 at around 7 p.m. and were taken to the destination point in the Peninsula. After arriving at the location the first woman got out of the car, but while the second passenger was only part of the way out, the taxi driver suddenly drove away, hitting the second passenger’s foot and ankle with the back wheel.

The woman then fell on the ground while her friend hit the window of the taxi with her hands, trying to make the driver stop.

A man that was nearby also witnessed the incident, later telling the responding police officer that the taxi, after hitting the passenger, stopped for a few seconds but then took off at high speed, leaving the passenger on the floor crying.

Later that day, the police found and questioned the driver about the incident. The man acknowledged not having paid enough attention when dropping off the passengers, assuming that they had both left the vehicle when he began to drive off.

He also told the police that he noticed the other woman hitting the window of the car but he did not bother to stop and check if anyone was hurt.

According to the complaint filed by the victim to the PJ on April 28, it all started around 3 p.m. on that day after the woman lost all her money at the casino tables.

She then invited the man to the room in a hotel in Cotai where she was staying, with the purpose of discussing the details of a loan she wanted to get from him, she said.

After a brief talk, the man told her that she did not fulfill the conditions for the loan but he proposed a different deal involving favors of a sexual kind. The woman refused to agree to such conditions, informing the man that she was on her period.

Later, with the pretext of checking again on the possibility of providing the loan, the man inspected the woman’s mobile phone and found out she was married. He then changed strategy, threatening to reveal to her husband her casino losses in an attempt to blackmail her in order to obtain her consent for sex.

According to the PJ report, the man began to sexually assault the victim but she again refused his attempt. Then she said she called on a friend for help when the man left room to get some food.

On June 6 the suspect in the case was intercepted while playing in a casino in Cotai and delivered to the PJ for investigation.

The man denied the accusations, saying that all that happened inside the room was done with the woman’s consent. Still, the PJ forwarded the case to the Public Prosecutions Office under the charge of rape.