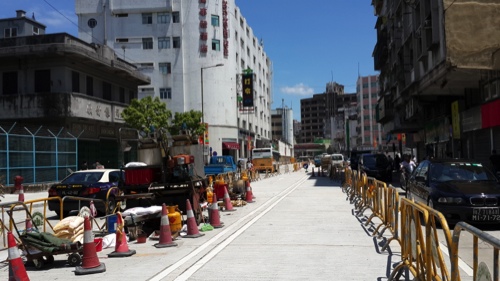 The Transport Bureau (DSAT) has said that it is striving to finish more than 30 major road projects before August 30. It has also claimed that repetitive digging is unavoidable under some circumstances.
Chong Chi Keong, the head of DSAT’s department of coordination, said that all of the bureau’s road projects are approaching completion. The bureau will communicate with the contractors and other public departments in order to finish all the major works before the coming Saturday.
“Nevertheless, there are several projects that will continue past the end of the summer holidays, such as the sewer construction near Rua da Bacia Sul,” Mr Chong said.
He pointed out that several major traffic arteries, including Estrada da Bela Vista and Avenida do Ouvidor Arriaga, have been or will be reopened soon.
The department head added that the projects on Rua das Lorchas and Rua do Almirante Costa Cabral were yet to be completed. However, DSAT will try to coordinate with different parties in order to facilitate the reopening of those roads on or before August 30.
Moreover, Chong Chi Keong has apologized for the inconvenience caused by the traffic congestion during the summer holidays, which stemmed from multiple road projects.
The department head explained that the bureau arranged for the major projects to take place during July and August, because there was due to be less traffic in these two months. He also expressed his wish for the public to understand the need for the revamp.
“For example, MTel is a public concessionaire. Macau Cable has also signed a new contract [with the government]. It is necessary for them to carry out the [cable-
laying] construction,” Mr Chong said.
He added that although DSAT is not directly responsible for monitoring the progress of the constructions, the bureau will still require contractors to work extra hours in order to make the August 30 deadline.
Furthermore, Chong Chi Keong argues that repetitive road-digging is unavoidable. He claims that DSAT cannot refuse road-digging applications filed by residents who have joined the Housing Bureau’s Provisional Subsidy Scheme for Common Parts Maintenance of Low-Rise Buildings, and who wish to install new facilities like water pipes and sewerage for their buildings.
DSAT must also allow constructions that include the installation of new electricity cabling or sewerage for newly opened restaurants or shops or new buildings.
However, he promised that the department will better coordinate the projects to mitigate the impact on residents.
In addition, Chong Chi Keong said that there will not be any major road surface repairs for the Grand Prix circuit this year, although there may be some minor repairs that he said will be able to be completed in one or two days.