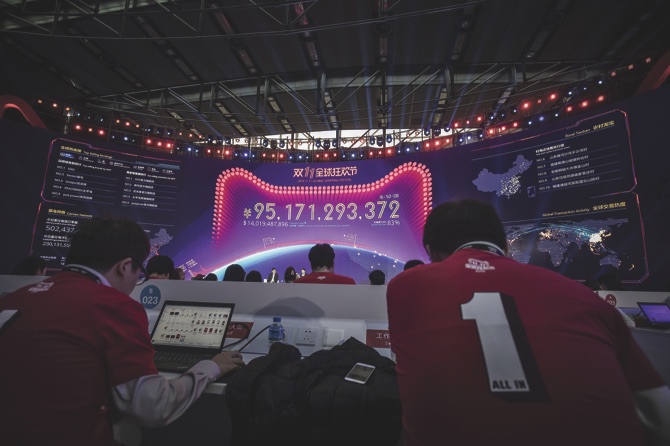 Sales on its e-commerce platform climbed 32 percent to 120.7 billion yuan (USD17.8 billion), easily topping last year’s total of 91.2 billion yuan. But that growth pace dwindled from last year’s 60 percent, a function of the scale that Chinese’s biggest shopping day has achieved as well as an economy expanding at its slowest pace in a quarter century.

Dwarfing both America’s Cyber Monday and Black Friday, the 24-hour online promotion is closely watched for clues on the health of the economy and its largest online retailer. Billionaire Jack Ma’s Alibaba pioneered the annual shopping spree in 2009 and has since transformed it into a social phenomenon, replicated by rivals including JD.com Inc. and now involving thousands of marquee labels across the world.

The e-commerce giant turned up the star-wattage for 2016, enlisting actress Scarlett Johansson, sports celebrity David Beckham, basketball legend Kobe Bryant and pop-rock band One Republic to headline a pre-sale gala and drum up international attention. Pop star Katy Perry pulled out at the last minute because of a family emergency.

Executives had set the bar high, confidently predicting another record-breaking endeavor even as a weakening yuan curbed enthusiasm for foreign wares.

“The consumption potential of 1.3 billion people in China is being uncovered,” Ma said, speaking at a press event. “We can see the huge potential of the Chinese market.”

China’s economy is increasingly dependent on its more than a billion consumers as global growth fizzles. Final consumption accounted for more than half of economic output last year. Shoppers have so far shrugged off a slowdown in the world’s second largest economy, with retail sales rising by 10.7 percent in September, a record for the year. The growing middle-class is now demanding better quality products, and innovative ways to shop.

“Many foreign brands, with and without local China presence, will use this shopping event to further raise their brand profile with Chinese consumers,” said Andria Cheng, an analyst at eMarketer.

Singles’ Day was invented by college students in the 1990s as a counter to Valentine’s Day, according to the Communist Party-owned People’s Daily. Written numerically, Nov. 11 is reminiscent of “bare branches,” a local expression for bachelors and spinsters. It’s since morphed into a consumption phenomenon involving months of planning, millions of logistics and technology personnel, and a nationwide cascade of ads and promotions.

The best-selling items on Friday included Apple’s iPhones, Nike and Adidas gear and Haier appliances, the company said on its official blog.

Some 14,000 brands are hawking their products. Alibaba is touting a virtual reality service to let Chinese buy from Macy’s in New York and Tokyo’s Otaku Mode. It’s added live-streaming to its sites and even a location-based Pokemon Go-like mobile game to try and drum up interest.

For the first six years, results were tabulated in Alibaba’s hometown of Hangzhou in eastern China. This year, it relocated its command center to the southern city of Shenzhen just across the border from Hong Kong, to try and capture international attention. Ma, who aims to get half the company’s revenue from beyond China by around 2025, has said that he wants to introduce the shopping festival to the U.S. and U.K.

Last year, a third of buyers made purchases abroad during the event –Nike sneakers and Levi’s jeans were among the hotter items. Global retail e-commerce is expected to grow by 24 percent to $1.91 trillion in transactions this year, according to eMarketer. In China alone, that number will increase by 36 percent to $899 billion, it said.

Alibaba’s event however has drawn controversy around how it accounts for purchases, or gross merchandise volume. The U.S. Securities and Exchange Commission has been looking into data from last year’s promotion, responding in part to concerns that the total may include sales faked by third-party merchants or transactions that haven’t been paid for. Vice Chairman Joseph Tsai has said the company is cooperating with the regulator, sharing facts in an investigation it voluntarily disclosed.

Allegations of numbers-inflation have surfaced locally as well. On Tuesday, the State Administration for Industry and Commerce said it had summoned the largest online retailers – including Alibaba, JD, Tencent Holdings Ltd. and Amazon.com Inc. – to a meeting, warning them against inflating sales, touting fake goods or predatory tactics on the day.

“There’s a lot of fuzziness into that number,” Paul Sweeney, an analyst with Bloomberg Intelligence, told Bloomberg Television. But “most investors look at the gross merchandise value that they report more for the directional tone that they set.” Bloomberg

hina said it’s committed to letting overseas banks own bigger stakes in securities and fund-management joint ventures in the nation, in a statement that was released after financial and economic talks last week with the U.K.

A 49 percent ownership limit will gradually be raised, the Ministry of Finance said in a statement Friday, without saying when or by how much. Foreign investors’ participation can boost the industry’s competitiveness and global influence, it said.

China also pledged to help companies increase investment in the U.K and support London as an offshore yuan center.

China was considering sweeping changes to its securities industry to let foreign banks control joint ventures and broaden their offerings, people with knowledge of the matter told Bloomberg in March last year. Regulators planned to give foreign-owned joint ventures permission to expand into areas beyond stock and bond underwriting, the people said at the time.

In response to the Bloomberg article, the China Securities Regulatory Commission said that it would study further opening the securities and futures industry, after already letting Hong Kong and Macau companies take control of their ventures under economic partnership agreements.