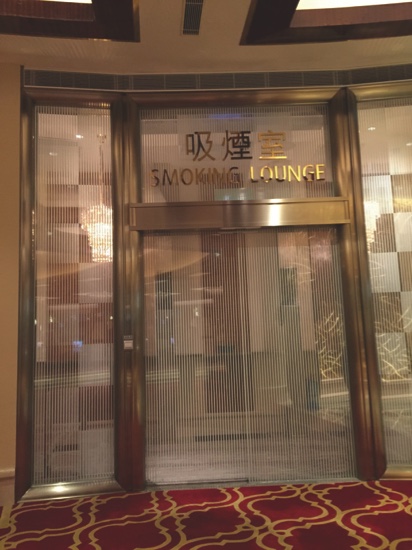 Gaming operators have invested millions to cope with shifting anti- smoking policies over the past few years. First, they had to adapt to a 2013 partial ban, allocating no more than 50 percent of their gaming area to smokers. Then, in October last year, operators were required to build specific lounges for those who want to have a puff in-between gaming sessions.
At a moment when the government seems to be pushing for a full smoking ban inside casinos, the Times was granted exclusive access to the smoking lounges of three gaming operators. We talked to senior executives from Sands China, Melco Crown Entertainment and MGM China, in order to understand how these smoking rooms are run, as well as to learn more about how much the operators have invested into building their lounges.
MGM China, for instance, claims to have spent millions (the company chose not to reveal the concrete amount of investment) preparing their gaming floors to suit the new requirements.

When the gaming floor smoking ban came into effect on October 6 2014, the operator initially invested money into removing some of the equipment that it had previously installed. The company then built four independent smoking lounges, an investment that amounted to millions.
MGM’s Senior Vice President of Design, Development and Construction, Mel Hansen, described the process leading up to the establishment of smoking lounges, recalling that all concessionaires held joint meetings with the Health Bureau in order to better understand what the new requirements were.
“We all achieved the same outcome of not having mixed air. The smoking air was extracted and vented outside.”
The smoking lounges were subject to inspection and approval by several government bodies, including the Land, Public Works and Transport Bureau, the Health Bureau, as well as the Fire Services and Gaming Inspection and Coordination bureaus. 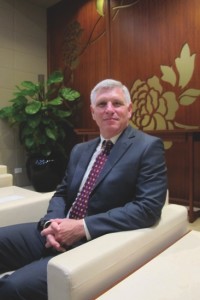 At MGM’s smoking rooms, the supplied air goes through a volume control system “so that it extracts more than what it puts in, which creates a negative pressure system inside the room [the smoking lounge], so that if someone opens the door, air from the inside does not go out,” said Mr Hansen, a South
African who has worked on the development of fourteen casinos during his career and is now the executive responsible for overseeing the MGM Cotai project. “Air from the casino will come inside and get extracted. Inside each of these booths we have these little units which ionizes and removes the smoke particles from the air. It makes the air clean inside,” he added.
Sands China built a total of 18 smoking lounges, including five at the Venetian, nine at Sands Cotai Central and four in Sands. The company’s Vice President of Facilities Management, Michael Naylor, said that the smoking lounges were designed “with the mindset that they were going to be here for a very long time.”
“They were highly engineered and we took into account all of the government’s previous recommendations for design,” he added.
Sands China said that it invested hundreds of millions into setting up the smoking lounges and improving the overall ventilation systems across its properties. 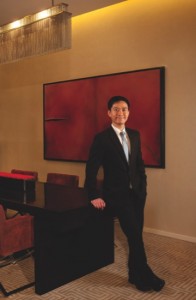 “We have a displacement air ventilation. We bring purified air into the smoking lounges and through the displacement ventilation, so obviously we have a very high rate of air change,” Mr Naylor clarified.
He added that, “then the air is sucked out to the top. That air on its way out is also filtered through HEPA filters. So we treat the air before it goes out.”
Furthermore, he recalled that the air going into the smoking lounge is treated and air-conditioned. “It was designed in a way that negative pressure [unidirectional air in and no air out] in the lounge is maintained. It means that the air from the surrounding casino will be drawn into the lounge when the door is open (…) It works out to be approximately 90–10: 90 percent of the air is supplied by the purified air-conditioning system that feeds it; the other ten percent will come through the door and keep the smoke from leaving the lounge,” he clarified.
Melco Crown Entertainment is also using a similar system in the 17 smoking lounges it has built across its properties. The operator said that it invested over MOP30 million to set up the smoking lounges. It then funneled over MOP150 million into improvements to the ventilation systems in its VIP areas. This included building a double air curtain system around each gaming table to protect the health of casino dealers.
The company’s Vice President of Property Services, Joshua Ho, told the Times that Melco consulted with experts from Hong Kong and Australia before developing the technology for its smoking lounges.
“At the smoking rooms we have a technology called displacement ventilation. This kind of technology is usually used in hospital operating theatres. So what we call the ‘good air’ comes from ground-
level and is exhausted into the mid and top levels. The air basically circulates within the room. So it’s not a traditional air-conditioning system,” he explained. 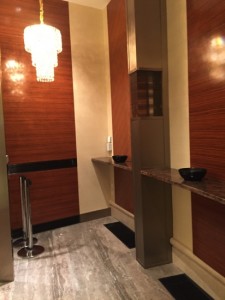 Smoking Lounge at City of Dreams 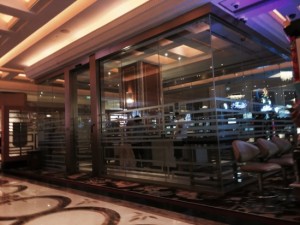 Furthermore, Mr Ho clarified that the air surrounding the smoking lounges enters the room when the sliding door opens, but the air inside does not go out: “We keep it in negative pressure, so actually the air does not go out of this room. Also the air inside does not circulate within the building at all because we have an exhaust system. We have an ionizer, which is charging the air, so as to avoid any contamination or dust. And it will help reduce the effects of the smoke.”
The three gaming operators visited by the Times made assurances that they strive to maintain good air quality standards within their casinos, and even within smoking rooms.
MGM’s Mel Hansen said that the air inside the smoking lounge is totally extracted outdoors and there is equipment in place to clean it up so as to create a better experience for the smokers, by comparison to the system seen at airports.
The design concept is very similar to those in hospital wards dedicated to infectious respiratory diseases, according to the executive.
MGM tests the air quality across their property monthly, and the results are posted on boards and are easily accessible to the public. Even when 50 percent of the floor was designated for smoking, the air quality on the smoking side was considered acceptable according to government imposed standards.
Mr Ho from Melco said that the company assesses its air quality each month as well. “It’s much better now, you can feel it now passing by the mass gaming area. We do regular tests and there’s no contamination to the non-gaming area. One of the regulations says that we have to measure MP2.5, which is a very fine level of particles. So if you look at the government website sometimes the outdoor air quality is actually worse than here.”
Mr Naylor stated that Sands China takes indoor air quality
very seriously. “We started working on improving our air quality a year before the smoking legislation even started. We spent a lot of money prior to the government event mandating that we do. We’ve done a good job in improving the health of our team members,” he said.
He recalled that even going back to the original law, one of the reasons why Sands China’s properties, with a few small exceptions, have never failed an indoor air quality test “is because all the air coming from outside and any return air going back into the casino is filtered through HEPA filters which clean the air to below PM2.5 standards.”
Moreover, he said that Sands China also provides monthly reports on its casinos’ air quality. On their VIP gaming areas, the company conducts indoor air quality tests, while also performing spot checks in the areas surrounding the smoking lounges.
Investment in smoking lounges by all six gaming operators is said to have reached over MOP1 billion.
The three gaming operators reiterated that they are not fighting against the local government’s policies. However, they recalled that it is important to have an in-depth study to assess the impact of this policy on the economy and the community.
Furthermore, they believe that the smoking lounges are a good solution, allowing them to maintain good air quality standards.

The three gaming operators have also invested in automatic doors with push buttons for their smoking lounges, so that the doors only open when needed, thus maintaining the atmosphere inside the room. Ashtrays and water tanks were also set up inside. Catarina Pinto and Paulo Barbosa