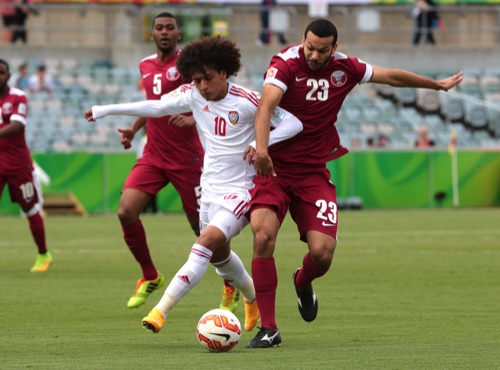 UAE’s Omar Abdulrahman, left, and Qatar’s Ahmed Mohamed Elsayed battle for the ball during the first round soccer match of the AFC Asia Cup between the United Arab Emirates and Qatar in Canberra, Australia

Ehsan Hajsafi and Masoud Shojaei scored late in each half to give Iran a 2-0 win over a determined Bahrain in their opening match of the Asian Cup yesterday.
In a contest that started at a frenetic pace with plenty of chances for each side, Hajsafi finally made the breakthrough for Iran in the second minute of first-half stoppage time.
Hajsafi gathered an attempted clearance from an Andranik Teymourian corner to fire the ball from just outside the area over the Bahrain defense and the outstretched arms of goalkeeper Sayed Mohamed Abbas.
Iran doubled its lead in the 71st minute when Masoud collected a Teymourian cross and guided the ball past the near post.
Iran takes a share of first place in Group C with the United Arab Emirates with one win each.
Earlier, Ahmed Khalil and Ali Mabkhout scored two goals each as the UAE took advantage of a series of goalkeeping errors to beat Qatar 4-1 in the Group C opener in Canberra.
The Melbourne match was virtually a home game for the Iranians with most of the 17,700-strong crowd at the Rectangular Stadium made up of chanting Iran fans dressed in the team’s white, red and green.
The Bahrainis were determined not to be awed by their higher-ranked opponents and took advantage of every opportunity to threaten the Iran goal.
Iran had three goals called back for offside, while Reza Ghoochannejhad came close to scoring early in the second half when he forced a scrambling save from Abbas with a slow shot from inside the box toward the left corner of the goal.
Bahrain’s best chance of the second half came when Teymourian was called for tripping Faouzi Aaish, but Husain Baba Mohamed’s free kick cleared the wall only to be easily saved by Iran ‘keeper Alireza Haghighi.
In Canberra, Qatar goalkeeper Qasem Burhan was at least partially responsible for three goals in a blundering opener for the 2014 Gulf Cup champions.
“He made two mistakes but this is football,” said Qatar coach Djamel Belmadi. “In the previous competition, he was the best goalkeeper of the tournament. Today, was not his day … but the defenders also did not help him.”
Despite the Qatar errors, the UAE fully deserved the win and started well with Khalil and Mabkhout both shooting wide from close range in the opening 10 minutes.
It was Qatar, however, which took the lead midway through the first half. Majed Naser blocked an initial shot from Mohammed Muntari but Khalfan Ibrahim, positioned on the edge of the area, chested the ball down and lobbed it back beautifully over the head of the retreating UAE goalkeeper.
The UAE equalized nine minutes before the break when Qasem spilled a cross and, after a scramble in a crowded area, a defensive goal-line clearance from a Khalil header bounced off the striker’s chest and into the net.
Khalil’s free kick early in the second half deceived Qasem and bounced into the far corner of the Qatari goal.
Khamis Esmaeel’s well-struck free kick was parried by the Qatari goalkeeper into the path of Mabkhout, who scored into an empty net from close range. The striker added another goal in the 89th, ensuring the UAE scored four goals in an Asian Cup game for the first time.
The UAE squad remains in Canberra to take on Bahrain on Thursday, when Qatar plays Iran in Sydney. Neil Frankland, Sports Writer, Melbourne, AP