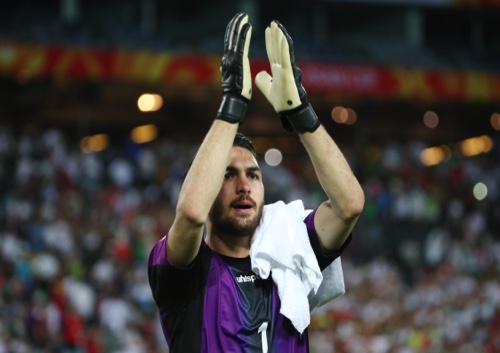 Iran’s goalkeeper Alireza Haghigh waves to the crowd following their win over Qatar in their AFC Asia Cup soccer match in Sydney, Australia

Ali Mabkhout eased the tension quickly for his team, scoring after just 14 seconds to set up a 2-1 win over Bahrain that secured a spot in the Asian Cup knockout stage for the United Arab Emirates.
Three-time champion Iran earned a place in the quarterfinals later yesterday with a 1-0 win over Qatar, and will meet the UAE on Monday in Brisbane to determine top spot in Group C.
Both teams are assured of joining Australia, South Korea and China in the knockout stage. Japan and Iraq are playing today in Group D, with the winner sure to join them.
Mabkhout was the toast of the Emirates, with his rapid-fire goal in the second game adding to his two goals in the opening 4-1 win over Qatar.
His goal was canceled out after 26 minutes, though, by a Jaycee John header. A quiet second half came to life in Canberra with an own goal, as Bahrain captain Mohamed Hasan headed an Amer Abdulrahman free-kick into his own net.
At Sydney, 20-year-old Sardar Azmoun scored in the second half to lift Iran over Qatar.
Iran, the top ranked team in the tournament, had to be patient against a well-organized Qatari defense, before Sardar broke the deadlock after turning his defender and poking the ball past keeper Qasem Burhan.
“It was a brilliant goal”, said former Real Madrid and Portugal coach Carlos Queiroz. “It was a special movement, a great turn at the level of the best center forwards I have worked with in my life. For a young player he has a great future in front of him.”
Iran has six points to sit second behind UAE on goal difference in the group. Qatar and Bahrain are out of contention with a game remaining.
This was only the second Asian Cup finals meeting between these two nations, since Iran’s 2-0 win in 1988, and despite the closeness of the score Iran was never troubled by the 2014 Gulf Cup champions.
Quieroz opted to start with Sardar, ahead of the more experienced Reza Ghoochannejhad, as Iran’s only change from the opening 2-0 win over Bahrain.
It was Sardar who had Iran’s first chance when he rose highest to head a Mehrdad Pooladi cross on target in the 3rd minute but was easily saved by Qasem.
That proved to be Iran’s only shot on target until late in the first-half when captain Javad Nekounam’s headed shot was cleared off the goal-line by Ahmed Mohamed with Qasem beaten to keep the Qataris level at half-time.
The breakthrough finally came in the 52nd minute after Dejagah played a low cross for Sardar, who turned past defender Almadhi before poking the ball past Qasem’s outstretched leg and into the right corner of the goal, sparking wild celebrations among the Iranian supporters in the 22,672-strong crowd.
“I think we deserved to win the game,” said Quieroz. “I’d like to dedicate this win to the fantastic Iranian fans that come here to support the team. The win is for them.” Keiran Smith, Sydney, AP