Football | Australia rising in Asia, on and off the field 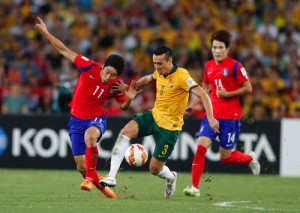 Australia’s victory over South Korea in the Asian Cup final over the weekend capped a remarkable period for a nation which is only just awakening to the possibilities that membership of Asia provides — on and off the field.
Inside three months Australia has catapulted itself to the forefront of the Asian football confederation, the world’s largest.
Watched by a 76,385-strong crowd, Australia’s 2-1 defeat of two-time champion South Korea in extra time at Sydney’s Olympic stadium was the country’s first Asian Cup title since moving to the Asian zone from Oceania in 2006.
It continued a run of strong performances at the quadrennial continental championships for Australia, which includes a final appearance in 2011 where it eventually lost to Japan 1-0 in extra time.
“The goal should be for this confederation to break the European and South American monopoly on the World Cup,” said Australia coach Ange Postecoglou after guiding the Socceroos to its breakthrough victory. “This tournament here, it’s a great achievement but it’s not the end of the journey. It is the beginning for us.”
“I’m not going to put any limits on this group of players. Whatever we do, we’ve set the standard here today.”
The Asian Cup was the first major football tournament to be hosted by Australia and provided some much-needed positive news after the controversial 2022 World Cup bidding process that saw Australia lose out to Qatar.
FIFA President Sepp Blatter’s arrival at the official medal presentation after the final triggered boos from home fans, eager to voice their displeasure at the tainted governing body.
The tournament, though, was well supported by the general Australian public, with over 640,000 people attending the 32 games in five cities — Sydney, Melbourne, Brisbane, Canberra and Newcastle — a 50 percent increase on attendances at the previous edition in Qatar in 2011.
The organizers also boasted of record television audiences across the continent.
In China, Asia’s biggest market, the cumulative average viewership for the event was 182 million by the end of the semifinal stage and the cumulative reach totaled 950 million. The AFC cited its data from CSM Media Research – KantarSport Asia.
Television viewership in the host nation exceeded one million for its semifinal victory over the United Arab Emirates, making it one of the most widely watched football matches in the country’s history.
“I think it’s going to do a lot of things,” said Australia winger Mathew Leckie, who plays for second-tier German club FC Ingolstadt. “It’s incredible the amount of people that came tonight. For me I think it’s the biggest Australian success in sport.
“Champions of Asia, it’s quite incredible and you know you could see how much everyone loved tonight.”
At club level, Australia has also had a breakthrough year in Asian competition.
In November, Australia club side Western Sydney Wanderers, coached by former Socceroo Tony Popovic, claimed the country’s first Asian club-competition silverware by beating the more-fancied Al Hilal of Saudi Arabia 1-0 on aggregate in the Asian Champions League.
“We came into this confederation knowing it would be a huge challenge, the Matildas won the (women’s) Asian Cup (in 2010), then the Wanderers in the Champions League and now we’ve won,” Postecoglou said.
“I said from day one we won’t take a backward step from anyone. We don’t do it in another sport and we don’t do it in football.” AP