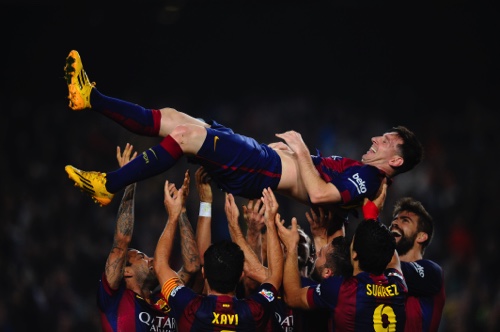 FC Barcelona’s Lionel Messi, from Argentina, is lifted by his teammates after scoring against Sevilla during a Spanish La Liga soccer match between FC Barcelona and Sevilla, at the Camp Nou stadium

Lionel Messi netted a hat trick to shatter the Champions League goalscoring record as Barcelona won 4-0 at APOEL yesterday, while Sergio Aguero also bagged three goals as Manchester City snatched a 3-2 victory over 10-man Bayern Munich.
Messi took his tally to 74 with his fifth Champions League hat trick in 91 matches. The previous record of 71 goals had been set by former Real Madrid and Schalke striker Raul over the course of 142 matches.
“I am happy for having achieved such a nice record in a competition of this importance, but the really relevant thing is that we took the three points,” Messi said. “Barca played a great match.”
Luis Suarez had opened the scoring with his first competitive goal since moving from Liverpool in the summer.
Also in Group F, Paris Saint-Germain beat Ajax 3-1. Barcelona and PSG had already qualified for the knockout stages and play each other next to decide the group winner.
In City’s Group E, a last-gasp goal saw CSKA Moscow snatch a 1-1 draw against Roma, which leaves all three teams level in the battle for second spot.
Chelsea cruised past Schalke 5-0 to seal its spot in the knockout stages, with the German side now needing to win in Maribor in the final match to leapfrog Sporting Lisbon which beat the Slovenian club 3-1.
Shakhtar Donetsk had already secured progression before its 1-0 defeat at home to Athletic Bilbao, thanks to already-qualified Porto’s 3-0 win over BATE Borisov earlier.
The 27-year-old Messi had broken the Spanish league’s goalscoring record at the weekend with a hat trick and he did the same in Europe’s elite club competition.
Messi broke the record in the 38th minute, when he redirected Rafinha’s effort from 20 yards out, and he doubled his tally in the 58th, chipping Daniel Alves’ through-ball past APOEL goalkeeper Urko Pardo.
The Argentina forward completed his hat trick with a tap in three minutes from time.
Edinson Cavani scored twice and Zlatan Ibrahimovic notched his first club goal for nearly three months after Davy Klaassen had headed Ajax level.
Bayern Munich was forced to play the majority of its match with 10 men after Mehdi Benatia was sent off in the 21st-minute for bringing down Aguero, who scored the resulting penalty.
The German side rallied to take the lead with goals in the final five minutes of the first half through Xabi Alonso’s free kick and Robert Lewandowski’s header.
But Aguero scored again in the 85th and then in the first minute of stoppage time consigned Bayern to a first competitive loss this season.
Roma had seemed on the verge of victory after Francesco Totti beat his own record as the Champions League’s oldest-ever goalscorer, but Vasily Berezutski’s cross from deep in the last moments of the second half flew over the heads of the Roma defense and went in at the far post for a freak equalizer.
At Schalke, John Terry, Willian and an own goal by Jan Kirchhoff had given Chelsea a comfortable halftime lead before second-half substitutes Didier Drogba and Ramires added to the scoreline.
In Group H, Hector Herrera gave Porto the lead over BATE Borisov with a spectacular shot from the edge of the box on 56 minutes before setting up Jackson Martinez and Cristian Tello. Daniella Matar, AP