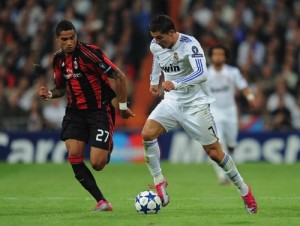 Defending champion Real Madrid will play Schalke in the last-16 of the Champions League, after routing the Germans at the same stage last season.
In another repeat pairing in yesterday’s draw, Barcelona will again travel first to play Manchester City.
Arsene Wenger’s Arsenal will host Monaco, the club where the French coach made his reputation in the 1980s.
Paris Saint-Germain hosts Chelsea in a repeat of last year’s quarterfinal won by the English club.
Bayern Munich is away first against Shakhtar Donetsk and Juventus hosts Borussia Dortmund, which beat the Italian champion in the 1997 final.
Also, it was: Bayer Leverkusen vs. Atletico Madrid and Basel vs. Porto.
First-leg matches are played Feb. 17-18 and 24-25. Return matches are March 10-11 and 17-18. AP