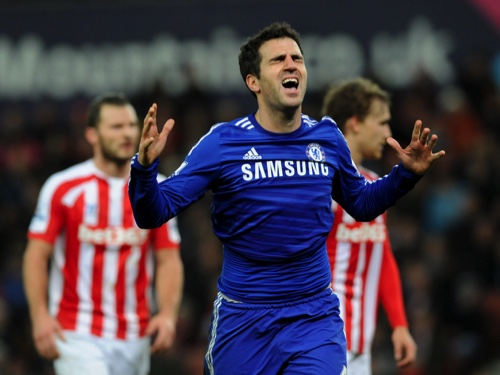 Chelsea retained its three-point lead at the midpoint of the Premier League season over the weekend despite being held to a draw by Southampton, thanks to Manchester City collapsing against struggling Burnley.
After Eden Hazard recovered a 1-1 draw for Chelsea at fourth-place Southampton, defending champion City threw away a 2-0 lead at home to draw 2-2 with 19th-place Burnley.
On a day when 18 of the 20 teams were in action less than 48 hours after playing on Friday in this traditionally packed Christmas fixture program, the top four all drew.
Manchester United missed an opportunity to make ground on the pacesetters, remaining seven points behind City in third place after being held 0-0 at Tottenham.
But Arsenal dislodged West Ham from fifth place by winning their London derby 2-1 after Santi Cazorla earned and converted a penalty and Danny Welbeck scored the second.
At the other end of the standings, Leicester remains bottom but raised its hopes of survival by beating Hull 1-0 for its first victory since September.
Hull is only out of the relegation zone due to its superior goal difference over Crystal Palace, which drew 0-0 with fellow struggler Queens Park Rangers.
The most goals of the day came in a clash of mid-table teams at St. James’ Park, with Jack Colback scoring his first Newcastle goal to clinch a 3-2 win over Everton.
A big surprise looked possible at Southampton when Chelsea conceded in the 17th minute as Sadio Mane raced onto a pass from Dusan Tadic and lifted the ball over goalkeeper Thibaut Courtois.
But Southampton was punished for a defensive lapse just before halftime. Hazard ran onto a pass from Cesc Fabregas, cut inside a defender and shot across goal and into the far corner. It was Fabregas’ 13th assist of the season, equaling the league-leading total by Steven Gerrard in 2013-14.
Even the dismissal of Southampton midfielder Morgan Schneiderlin in the 89th for a second booking couldn’t prevent another memorable result in this unexpected campaign for the south-coast team.
“Southampton defended with everything and they defended a lot,” Chelsea manager Jose Mourinho said. “We tried everything and we dominated, we created a lot.”
Unlike Chelsea, City did score twice — but conceded as many.
David Silva scored his fourth goal in three appearances after being set up by Jesus Navas midway through the first half and Fernandinho curled in a shot off the underside of the crossbar before halftime.
But George Boyd began Burnley’s comeback two minutes after the break after Danny Ings shot across the face of goal. And Ashley Barnes grabbed the equalizer in the 81st minute by reacting quickest to connect with the ball in a crowded penalty area.
In east London, Arsenal did manage to hold on to its lead.
Cazorla was tripped in the area and converted the penalty in the 41st to put Arsenal ahead. Danny Welbeck doubled the lead three minutes later after a pass from Alex Oxlade-Chamberlain.
Although Cheikhou Kouyate pulled one back for West Ham with a header at the start of the second half, Arsenal held on for its second 2-1 win in three days to nudge close to the top four.
“We look to be more stable,” Arsenal manager Arsene Wenger said. “We have a big game in front of us now against Southampton (on Thursday).” Rob Harris, Sports Writer, London, AP