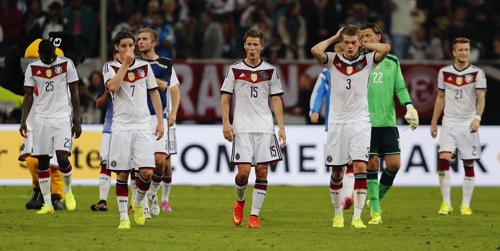 Qualifying for the largest-ever European Championship in 2016 was supposed
to be a simple task for the continent’s top teams.
It’s not turning out that way.
World champion Germany, Portugal and the Netherlands have made disappointing starts to their campaigns and are all outside the top two in their groups after three games. The top two countries from nine groups qualify automatically for the tournament in France, along with the best third-place finisher.
Italy and England, with three wins from three games, are showing how it should be done, while teams like Slovakia, Northern Ireland and Wales are top of their groups and giving themselves a great chance of a rare place at a major tournament.
The Germans, who are third in their group with four points, are expected to rack up the goals against Gibraltar in probably the biggest mismatch in the qualifying campaign. The Dutch have lost two of their three games in Group A, leading to speculation about the future of coach Guus Hiddink ahead of a match against Latvia.

UNKNOWN OPPONENT. Germany’s players admit they cannot name a single player from Gibraltar, the territory of only 30,000 people that is playing in its first qualifying tournament since being accepted by UEFA. Almost all of Gibraltar’s players are amateurs.
“But we have respect for every opponent,” Germany defender Jerome Boateng said.
Germany needs to get its qualifying campaign back on track after losing to Poland and drawing at home against Ireland. Since winning the World Cup in July, Germany also has lost to Argentina in a repeat of the final.
Team manager Oliver Bierhoff said the side has had trouble coming down to earth after winning the World Cup.

SPAIN STRETCHED. Injuries to key players are stretching Spain’s squad ahead of the qualifying match against Belarus and a friendly against Germany on Tuesday.
Striker Diego Costa has been rested to give him time to recover from groin problems, a hamstring problem has ruled out midfielder Cesc Fabregas and Barcelona playmaker Andres Iniesta limped off against Real Madrid and is also missing.
That gives opportunities to others, with midfielders Bruno Soriano and Ignacio Camacho and strikers Jose Callejon, Alvaro Morata and Manuel “Nolito” Agudo fighting for a place up front.

BALOTELLI IS BACK. Mario Balotelli’s first call-up to Italy’s squad in the tenure of coach Antonio Conte was somewhat of a surprise. After all, Balotelli has scored only two goals in 14 matches with Liverpool — none in the Premier League — and is far from his best form.
Having ignored Balotelli for his first four matches in charge, why did Conte change his mind now?
“This was part of the rebuilding plan, to test different players,” Conte said. “Balotelli is starting for Liverpool. I’m forced to call up many players who are not starters for their clubs.”
Balotelli faces a fight for a starting spot for Sunday’s Group H qualifier against Croatia in Milan because Ciro Immobile and Simone Zaza have played well together in Balotelli’s absence, and Graziano Pelle made the most of his debut last month by scoring in a 1-0 win over Malta.
Italy and Croatia both have nine points.

HIDDINK UNDER PRESSURE. Arjen Robben is convinced Guus Hiddink’s job as Netherlands coach is safe.
Hiddink has started his second tenure in charge of the Dutch team with a dismal record of one win and three losses, including losing Euro 2016 qualifiers to the Czech Republic and Iceland. The Netherlands are third in Group A behind those nations.
Last week, Hiddink strongly hinted that he would quit if his team loses to Latvia in Amsterdam on Sunday.
“It is irrelevant,” Robben told Dutch broadcaster NOS. “We are going to win. We have to win.”

RECORDS. Cristiano Ronaldo needs one more goal to break the scoring record in European Championship games that he currently shares with former Turkey striker Hakan Sukur and Danish forward Jon Dahl Tomasson with 22 goals. Portugal, which is third in Group I, hosts Armenia.
Wayne Rooney is set to make his 100th appearance for England in its home game against Slovenia, which is three points behind in second place in Group H.
The top two in Group F meet when Romania hosts Northern Ireland in Group F and Wales puts its unbeaten start in Group B on the line against Belgium, which is in third place after two games. Steve Douglas, Sports Writer, AP / Odds by Betfair