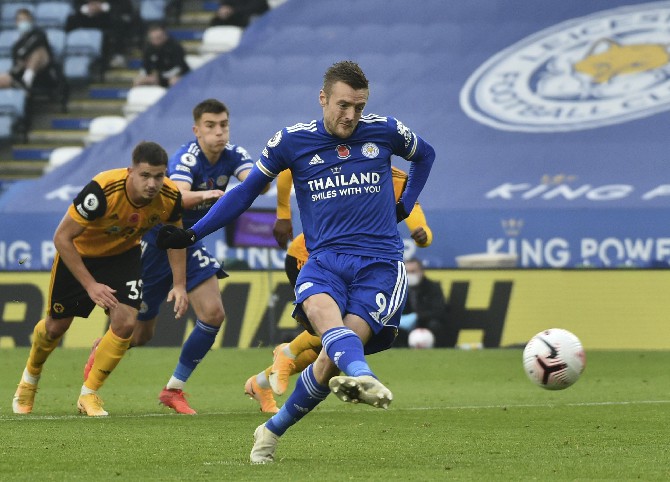 With a trio of unfamiliar leaders, what lightheartedly became “Stop The Count” weekend in the Premier League ended with Leicester on top.
Teams and disbelieving fans were riffing off President Donald Trump’s post-election demand — starting Friday when Southampton climbed to the summit of English football for the first time in 32 years. The club tweeted “STOP THE COUNT” above a snapshot of the league table.
Of course, with only eight of 38 games played, the league couldn’t stop Friday night, however much the south-coast club joked it wanted it to after beating Newcastle.
Earlier, Tottenham had dislodged Southampton after Harry Kane’s late goal clinched a 1-0 win at West Bromwich Albion. But Tottenham rising to top spot for the first time in six years lasted only a couple of hours.
Leicester rose into first place with a 1-0 victory over Wolverhampton secured by Jamie Vardy’s penalty.
“It’s been an incredible start,” said Brendan Rodgers, whose Leicester side narrowly missed out on a top-four finish last season. “We’ve seen that in this early part of the season, how the players are developing when they’re under pressure. And then obviously today, on the back of all the games we’ve had … to show that mentality and desire to not concede was so pleasing as a manager.”
The improbable 2016 Premier League title winners retained the lead heading into the two-week international break thanks to champion Liverpool being held 1-1 by Manchester City. Mohamed Salah’s 13th-minute penalty for Liverpool was canceled out by Gabriel Jesus before Kevin De Bruyne missed a chance to win it for City from a spotkick.
Leading the standings used to be something Arsenal was accustomed to, but Aston Villa’s 3-0 victory meant the 13-time English champions have lost half of their eight games so far. And while Villa is three points behind Leicester, the central England team has a game in hand on all the teams in the top five.
The season, which started a month late due to the pandemic, is throwing up a series of unpredictable results in a congested schedule that is stretching squads.
It left Ole Gunnar Solskjær complaining about why — despite winning — his 14th place-Manchester United side had to play at Everton on Saturday lunchtime after a Champions League game in Turkey on Wednesday night.
Solskjær received backing in his grumbling about the league organizers from his managerial counterparts at Liverpool and City. Both Jürgen Klopp and Pep Guardiola are demanding another vote — by Premier League clubs to allow five substitutions.
“We have to find solutions because it is so tough,” Klopp said.
Two additional changes were permitted after the restart of last season in June following the 100-day coronavirus shutdown but the leading clubs were outvoted in their push to retain the measure.
“It is so demanding for the players,” Guardiola said. “I don’t understand how the Premier League or the people who is in charge decide this kind of things.” ROB HARRIS, MANCHESTER, AP