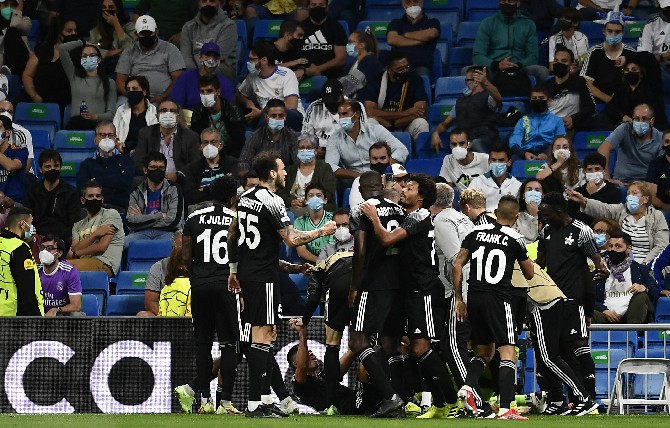 The start to life in the Champions League couldn’t be going much better for Moldovan club Sheriff.
Sébastien Thill scored a 90th-minute winner as the newcomers stunned Real Madrid 2-1 at the Santiago Bernabéu Stadium yesterday [Macau time].
Thill netted with a powerful shot into the top corner from the edge of the area to give Sheriff its second consecutive victory. It leads Group D with six points, three more than Madrid and five more than both Shakhtar Donetsk and Inter Milan, which drew 0-0 in Ukraine in the other group match.
Sheriff beat Shakhtar Donetsk 2-0 in its opener at home, while Madrid won 1-0 at Inter.
“For us this is a dream come true to have won here,” Sheriff captain Frank Castañeda said. “We’re so happy, and just enjoying it. We have full faith in what we’ve been doing and things are going well for us. We didn’t just come here to sit around, we know how good our players are and luckily for us Madrid weren’t able to take their chances and we took ours.”
Sheriff is the first club from the Moldovan league to qualify for the group stage of the Champions League, although it is based in the breakaway region of Transnistria, a self-proclaimed independent nation which isn’t recognized by any United Nations member state.
The club founded just over two decades ago is funded by the Sheriff company, which runs large parts of the economy in Transnistria and has strong political ties.
“We were unlucky,” Madrid coach Carlo Ancelotti said. “Everything went their way and nothing went our way. More than concerned, we are sad. We lost because of details.”
The visitors had rarely threatened until opening the scoring after a breakaway in the 25th, with Jasurbek Yakhshiboev finding the far corner with a firm header past Madrid goalkeeper Thibaut Courtois.
A mistake by Courtois a few minutes later while trying to move the ball up the field nearly gave Sheriff another goal, with Yakhshiboev’s shot missing just wide of the post.
Benzema, Vinícius Júnior, and Eden Hazard all had scoring chances as Madrid kept pressuring, but failed to capitalize on them while Sheriff threatened on counterattacks.
Sheriff goalkeeper Giorgos Athanasiadis was named the player of the match for helping stop a Madrid attack that had more than 30 attempts.
“This is soccer,” Madrid midfielder Casemiro said. “We were in control during the entire match and had many scoring chances. They had only two and scored twice.”
Benzema equalized from the penalty spot in the 65th after a controversial foul on Vinícius Júnior as he tried to get past a defender inside the area. The referee initially let play continue but awarded the penalty after checking the video review.
Less than 10 minutes later, Sheriff had a potential winner by substitute Bruno called back for offside, but Thill still secured the victory near the end with a booming first-timer that hit the upper corner of the net.
“We played a really good game,” said Thill, who became the first player from Luxembourg to score a goal in the Champions League. “The side were so brave with how we played and luckily enough I was able to score a bit of a stunner.”
Sheriff players celebrated loudly after the final whistle as many Madrid fans jeered their team after its second consecutive setback at the Bernabéu.
Ancelotti made four changes at once after the equalizer, with Luka Modric and Toni Kroos among those coming off the bench.
Madrid next visits Shakhtar Donetsk, while Sheriff plays at Inter Milan. TALES AZZONI, MADRID, MDT/AP