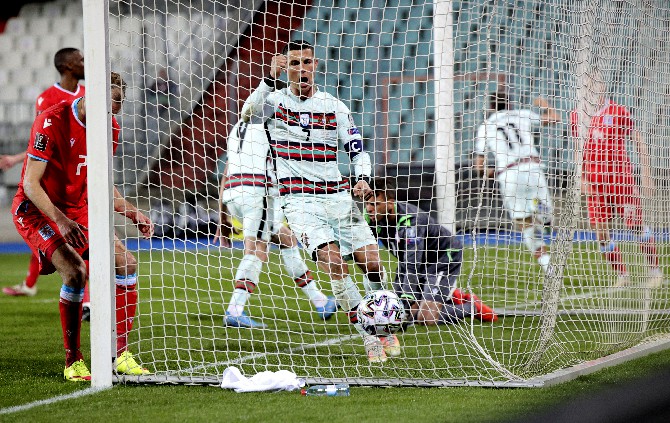 Belgium and the Netherlands scored 15 goals combined in big routs in World Cup qualifying yesterday [Macau time], while Portugal got one from Cristiano Ronaldo in its victory against a Luxembourg team that tinkered with another shock result.
Belgium crushed Belarus 8-0 to stay at the top in Group E, while the Dutch trashed Gibraltar 7-0 to go second behind Turkey in Group G.
Minnow Luxembourg, which opened with a surprising win against Ireland, looked on its way to pulling off another upset after it took the lead against Portugal, but the visitors came from behind to stay at the top of Group A along with Serbia, which earlier defeated Azerbaijan with another double by Fulham forward Aleksandar Mitrovic.
“It was a difficult first half,” Portugal midfielder Renato Sanches said. “Luxembourg started well, but I think we controlled the game. They had a set piece and scored, but I think that from that point on we controlled the game.”

After being held scoreless in the first two qualifiers this year, Ronaldo scored his 31st goal in World Cup qualifying early in the second half in Portugal’s victory at Luxembourg.
He has now scored for Portugal in every calendar year since his first international goal in 2004, and moved six away from tying the all-time scoring record for a men’s national team. The record of 109 goals is held by former Iran striker Ali Daei, the only other male soccer player to surpass the 100-goal milestone.
Gerson Rodrigues had put the hosts ahead in the 30th minute but Diogo Jota equalized for Portugal in the second minute of stoppage time before Ronaldo and João Palhinha added second-half goals.
Portugal was coming off a 2-2 draw against Serbia. Both teams are tied with seven points each from three matches.
Ireland, the other Group A team, played a friendly against World Cup host Qatar and was held to a 1-1 draw, staying winless in 11 games under coach Stephen Kenny.

Hans Vanaken and Leandro Trossard both scored a pair of goals as Belgium trounced Belarus with four goals in each half.
“I’m delighted with what I’ve seen from every player,” Belgium coach Roberto Martinez said. “I’ve seen players taking decisive roles, I was very pleased with the performance of the young guys and how this group works together.”
The home victory left Belgium three points ahead of the Czech Republic, which lost 1-0 at Wales thanks to a late Daniel James goal after an assist by Gareth Bale.
Wales and Belarus are a point behind the Czech Republic with a game in hand.

Gibraltar, ranked 195th in the world, kept the Netherlands largely at bay before the break but collapsed in the second half on the artificial turf of Victoria Stadium.
The visitors added to their 1-0 halftime lead with four goals by the 64th, then got two more closer to the end.
Memphis Depay had a double for the Dutch, which trails Turkey by a point after three matches.
“The goals came later than we had hoped, but at least they came,” Depay said “We remained positive, and things came good in the end. The team spirit is great, and we have belief in ourselves.”
Turkey missed a chance to earn its third straight win after squandering a 2-0 lead in a 3-3 draw with Latvia.

Mitrovic continued his hot streak by scoring a double in Serbia’s win at Azerbaijan.
He has scored five goals in the first three qualifiers. He also had a double in the opening 3-2 win against Ireland, and found the net once in the 2-2 draw against Portugal.
Mitrovic opened the scoring in the 16th and netted the winner in the 81st after Azerbaijan had scored in the 59th.

Like Turkey, Russia also missed a chance to win three straight to start its qualifying campaign, losing 2-1 to Slovakia.
The result left the Russians tied at the top of Group H with Croatia, which got its second victory by beating Malta 3-0.
Cyprus earlier defeated Slovenia 1-0 for its first win in the group. It was the fifth consecutive away loss for Slovenia in World Cup qualifying. TALES AZZONI, MADRID, MDT/AP